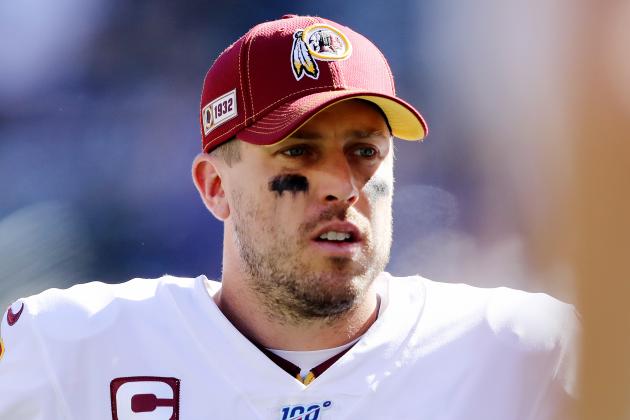 Per NFL Network's Ian Rapoport, Keenum is expected to start Sunday's game against the Miami Dolphins.

Rookie Dwayne Haskins, who has only played in Week 4 against the New York Giants when Keenum's foot prevented him from playing, continues to wait for his opportunity to start.

Callahan told reporters Tuesday that Haskins will receive more reps with the first team during practice, but he didn't commit to starting him in 2019:

“It might be a little bit of a shift in philosophy as we move forward. So he will be able to take repetitions at some point, whether it's at the beginning, the end, the middle, but we're really cognizant of trying to rep him up during the course of the practice so that he is prepared and that he does obviously get exposure to game-type repetitions that can get him potentially to a starting position here in the future or next year, whatever it may be.”

When Keenum sat out last week's game with a foot injury, Colt McCoy made his first appearance of the season as the starter against the New England Patriots.

Keenum has been inconsistent through four starts in 2019. The 31-year-old is completing 68.1 percent of his attempts with 970 yards, seven touchdowns and four interceptions.

Washington enters Sunday's game versus the Dolphins as one of two 0-5 teams in the NFL. It will go for its first victory of the season at Hard Rock Stadium against a winless Miami squad.