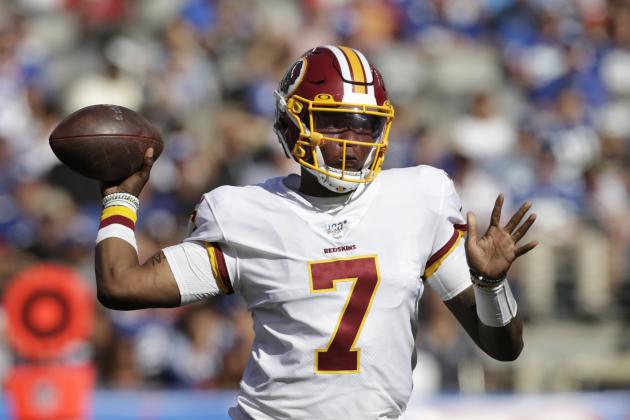 A coaching change still won't be enough to get rookie quarterback Dwayne Haskins onto the field for the Washington Redskins.

The Redskins fired head coach Jay Gruden on Monday and replaced him with Bill Callahan on an interim basis, but the new coach said Haskins is not a candidate to start "right now," per Josh Alper of Pro Football Talk.

The No. 15 overall pick in the 2019 draft has only appeared in one game so far while the Redskins sit at 0-5. He finished 9-of-17 with no touchdowns and three interceptions after coming on in relief during a Week 4 loss to the New York Giants.

While the rookie struggled in his lone appearance, the other options haven't been much better.

Case Keenum started the team's first four games before Colt McCoy took the job in Week 5, and the trio has led the offense to just 14.6 points per game.

With the Redskins likely already out of playoff contention, it makes sense to turn Haskins loose to show what he can do.

Still, Washington will remain patient with the development of a player who only started one season at Ohio State. Callahan did at least leave the door open for an appearance at some point in the near future.

"I think it's time now for him to be prepared," the interim coach said of Haskins, per the team's website. "Anything can happen, and as a quarterback, you're always ready to step in and step up. It happened against the Giants, and it can happen again."

A starter has not yet been named for Sunday's game against the Miami Dolphins.