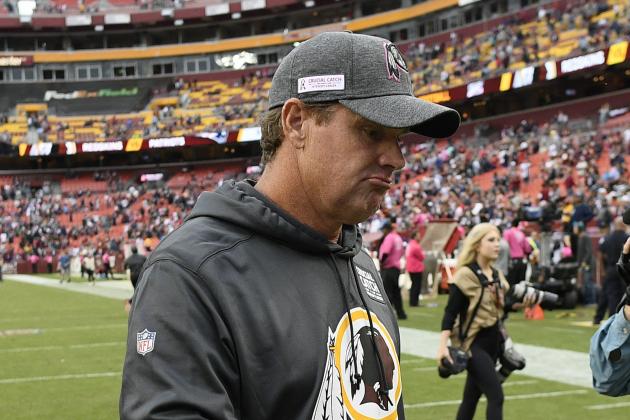 Former Washington head coach Jay Gruden is "not bitter" about his tenure with the team ending.

He told Les Carpenter of the Washington Post as much after Washington announced his firing on Monday. Offensive line coach Bill Callahan will be the interim coach.

"This is a production-based business, and I didn't get it done," Gruden said.

It is difficult to argue with Gruden's assessment seeing how he went 35-49-1 with one playoff appearance since he started as head coach in the 2014 season. However, he did take exception with team president Bruce Allen's press conference comments that suggested Callahan will feature harder work at practices.

"I want to make sure that everybody knows that I actually did work," Gruden said.

Carpenter noted Gruden received a text at 8 p.m. on Sunday following the loss to the New England Patriots that directed him to appear in owner Dan Synder's office at 5 a.m. Monday. That is when he was fired.

"Through the first five games of the 2019 season, the team has clearly not performed up to expectations, and we all share in that responsibility," the team's announcement read, in part. "Moving forward we are committed to doing all that we can collectively as an organization to turn things around."

Washington has been one of the league's worst teams this season at 0-5 and appears to be well on its way to a third straight losing campaign.

There isn't much reason for optimism outside of rookie quarterback Dwayne Haskins, who struggled in his only game action with three interceptions in a loss to the New York Giants. It should be noted Gruden elected to put Haskins into that game after Washington was already trailing by multiple scores but before the end of the first half, so the Ohio State product didn't even have halftime to prepare.

Perhaps having a healthy Alex Smith, Jordan Reed and Derrius Guice would have changed things for Washington, but the team decided it was time to move in a different direction.