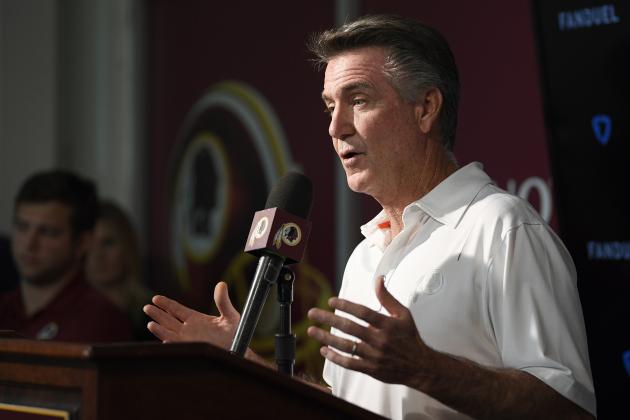 And there’s your new “winning off the field.”

Allen further elaborated on those comments, saying he believes the team has winning players in place and simply hasn't "put it together" yet on the field:

Gruden was fired after an 0-5 start to the season and a 35-49-1 record overall, with just one playoff appearance in his six seasons at the helm.

"Through the first five games of the 2019 season, the team has clearly not performed up to expectations, and we all share in that responsibility," the team said in a statement, per Grant Gordon of NFL.com. "Moving forward we are committed to doing all that we can collectively as an organization to turn things around and give our [Washington] fans and alumni a team they can be proud of in 2019 and beyond."

Offensive line coach Bill Callahan, who was also an assistant head coach, will take over as interim head coach.

While Washington's front office will hope that a coaching change injects some life into a hapless Washington team, it's fair to question if the organization's issues run much deeper.

One thing noticeable in the Bruce Allen presser: He didn't say a single positive thing about Jay Gruden's 6 years there. So even if he didn't point the finger directly ... He was pointing the finger.

Since Daniel Snyder purchased the team in May 1999, Washington has won the NFC East just three times and made the postseason on five occasions, going 2-5 in the playoffs. They've had just six winning campaigns under Snyder's ownership and have never won more than 10 games in a regular season.

In that time, two of Washington's rivals, the New York Giants and Philadelphia Eagles, have made five trips to the Super Bowl and won three Super Bowl titles between them (the Giants in 2007 and 2011, the Eagles in 2017).

Allen served as the team's general manager during the 2010-14 seasons and was officially named as team president in 2014. Under his watch, Washington has made the playoffs twice, has yet to win a playoff game and has had six losing seasons (and is on pace to add a seventh).

If, as Bruce Allen insists, the Redskins' culture is good, imagine what it would look like if it were bad.

It isn't the first time that Allen has defended the organization's culture amidst struggles. After the team went just 4-12 in the 2014 season, he told reporters, "We're winning off the field, but we got to start winning on the field," per Avery Stone of USA Today.

Since those comments, Washington has gone 31-37-1 in the regular season. Fans of the team are still waiting for the on-field winning to happen with more consistency.