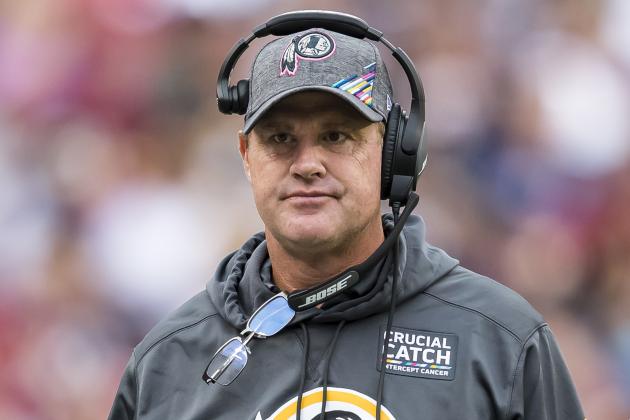 Washington announced the firing of head coach Jay Gruden Monday morning, and a list of potential replacements is already unfurling.

ESPN's Ed Werder disclosed that he had a conversation recently with "someone who knows [owner] Dan Snyder well and is aware of his thoughts" on who could replace Gruden. The names Werder relayed were Pittsburgh Steelers head coach Mike Tomlin, Tampa Bay Buccaneers defensive coordinator Todd Bowles and Kansas City Chiefs offensive coordinator Eric Bieniemy.

From @gmfb: The #Redskins have watched as several talented offensive minds left their coaching staff to excel elsewhere. Expect OC Kevin O'Connell to get consideration for the head coach job to prevent history repeating. pic.twitter.com/1fRLlzRW3Y

The MMQB's Albert Breer echoed Rapoport, stating that O'Connell has "been compared internally to Sean McVay by those who've worked with both."

Gruden's firing comes after the team fell to 0-5 with a 33-7 loss to the New England Patriots on Sunday. It marks the first time Washington has fired a head coach in-season since Norv Turner in 2000, per WJLA's Daniel Miller.

While Gruden's failure to win speaks for itself, ESPN's John Keim shifted blame toward the top of the organization:

"Bill Callahan takes over as interim coach, but the big question remains: Can owner Dan Snyder and team president Bruce Allen, who was hired late during the 2009 season, figure out a way to win? The Redskins are 59-89-1 since Allen arrived.

"The Redskins have now fired five coaches during Snyder's tenure, which began in 1999. He will hire his eighth coach after the season. None of the first seven—including Marty Schottenheimer (one year), Joe Gibbs (four) and Mike Shanahan (four)—had winning records in Washington. That's one Hall of Fame coach (Gibbs) and two who are debated as being worthy."

Of the names floated so far as rumored candidates, Tomlin has the highest pedigree. He has been in charge in Pittsburgh since 2007, going 126-70-1 with one Super Bowl title. The likelihood that Tomlin would leave the Steelers for Washington is improbable at best.

Bowles was hired as Tampa's defensive coordinator in January, but not before meeting with Washington. The former defensive back played for Washington for seven years, winning Super Bowl XXII with the team. As a head coach for the New York Jets from 2015-18, Bowles went 24-40 without a playoff appearance.

As for Bieniemy, he took over as offensive coordinator for the Chiefs prior to the 2018 season after Matt Nagy departed to become head coach of the Chicago Bears. He has been in Kansas City since 2013, previously serving as running backs coach.

Prior to this season, Bieniemy was interviewed for the Miami Dolphins' head coaching position. The job ended up going to New England Patriots defensive coordinator Brian Flores.

"I felt blessed and fortunate to be in this situation and have that opportunity to interview," Bieniemy told The Undefeated's Jason Reid at the time. "Would you love to be hired? Yes."

Bieniemy, or anybody, would have his work cut out for him upon arrival in D.C.