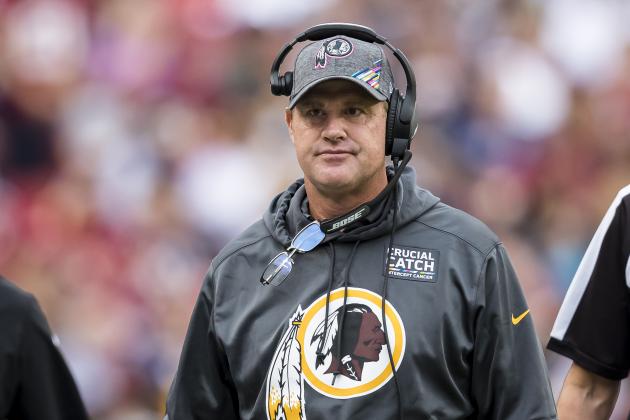 Following a 33-7 loss to the New England Patriots on Sunday amid speculation his job is in question, Washington Redskins head coach Jay Gruden told reporters that it's business as usual for him tomorrow unless told otherwise.

The Skins fell to 0-5 after losing their fourth straight game by double digits. They have lost their games by an average of 15.6 points.

Gruden is now 35-49-1 after taking over in Washington in 2014. He's led the Skins to one playoff appearance in 2015 after winning the NFC East title. Their postseason ended in the wild-card round against the Green Bay Packers.

Although Gruden's record is subpar, he's worked through a quarterback carousel in which seven different signal-callers have started since 2014. That doesn't count rookie Dwayne Haskins, who made a mid-game appearance against the New York Giants in Week 4 this season.

Gruden also has a strong backer in running back Chris Thompson, who tearfully defended the coach postgame:

Chris Thompson broke into tears when discussing Gruden after the game pic.twitter.com/rlsUNHTl0U

Still, the writing may be on the wall for Gruden after a hapless season in which almost nothing has gone right. ESPN's Scott Van Pelt even noted that the fanbase has been understandably apathetic in the nation's capital.

Another road game at home. I wonder what the "skintangibles" are today?

I can't tell you how many people I know who feel the same way I do now. Absolutely indifferent. That would have been impossible to believe not too long ago.

Washington has a lot of work to do outside the head-coaching gig to fix a team that's failed to win a playoff game since the 1991 postseason. The Skins have also averaged just 7.3 wins per game since owner Dan Snyder bought the team in 1999.

For what it's worth, Snyder and president Bruce Allen made a lightning-fast getaway after the game, per Mitchell Tischler of NBC Sports Washington:

Dan Snyder and Bruce Allen left the locker room immediately got in their cars and exited FedEx - the fastest I can ever remember them leaving after a game #Redskins pic.twitter.com/CXRscmtUGt

Perhaps change is on the horizon, but for now, the team is set to visit the winless Miami Dolphins on Sunday at 1 p.m. ET.