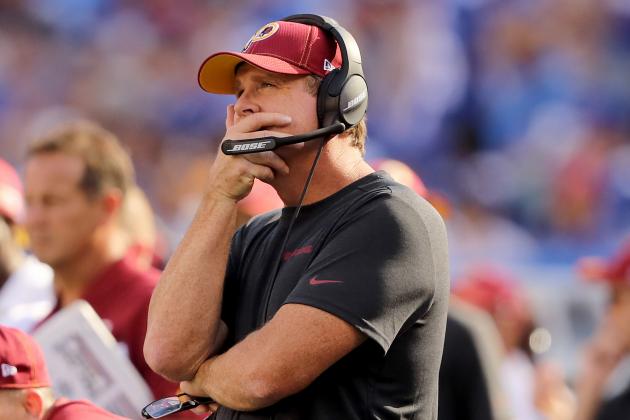 "Through the first five games of the 2019 season, the team has clearly not performed up to expectations, and we all share in that responsibility. Moving forward we are committed to doing all that we can collectively as an organization to turn things around and give our Redskins fans and alumni a team they can be proud of in 2019 and beyond."

NFL.com's Ian Rapoport first reported that Bill Callahan, who has been serving as the offensive line coach and an assistant head coach, will take over the head coaching duties on an interim basis. Callahan previously served as the Oakland Raiders' head coach in 2002 and 2003.

From @gmfb: The #Redskins have watched as several talented offensive minds left their coaching staff to excel elsewhere. Expect OC Kevin O'Connell to get consideration for the head coach job to prevent history repeating. pic.twitter.com/1fRLlzRW3Y

The 52-year-old Gruden was signed through the 2020 season.

Gruden compiled a 35-49-1 record during his six-year run in the nation's capital, where he made the playoffs once, going 0-1.

Gruden went 4-12 in his first year on the job, but he would soon find consistency. He led his team to a 9-7 record in year two, earning a wild-card berth. Washington lost to Aaron Rodgers and the Green Bay Packers in the NFC Wild Card Round.

Despite Gruden's reputation as an offensive guru, Washington ranks 30th at 14.6 points per game this season.

We'd like to send you the most entertaining Philadelphia Eagles articles, videos, and podcasts from around the web.