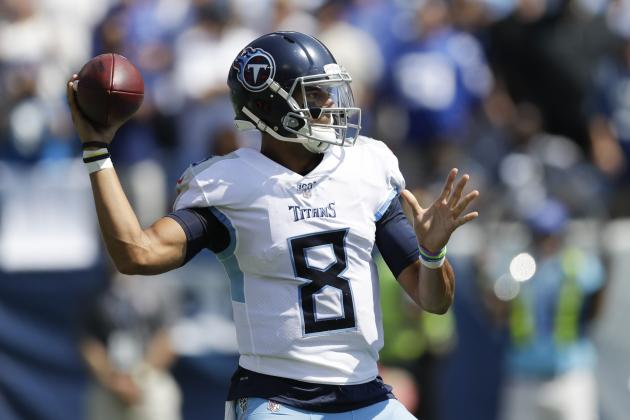 The Tennessee Titans and Jacksonville Jaguars both lost AFC South games in Week 2. Now, the two teams face off Thursday night. And it could give an even better indication of how the division will shake out this season.

The Titans are looking to get back on track after losing to the Indianapolis Colts this past Sunday. After a dominant Week 1 win over the Cleveland Browns, Tennessee lost to Indianapolis 19-17.

The Jaguars also lost a close game to a division rival four days ago when they fell to the Houston Texans 13-12. They're still seeking their first victory, as they also lost to the Kansas City Chiefs in Week 1.

However, Jacksonville's season could be trending in the wrong direction. The Jags are without starting quarterback Nick Foles (collarbone injury), and cornerback Jalen Ramsey has made it known that he would like to be traded.

With Titans-Jaguars set to kick off Week 3, here's a look at all the games taking place this weekend, along with picks for each of them and some prop bets to consider making.

Picks are in bold and made against the spread.

Although the Jaguars are 0-2 and coming off a game in which they scored only 12 points, they still have some offensive players capable of breaking out. That includes third-year running back Leonard Fournette.

Fournette has 113 rushing yards on 28 carries through the first two weeks, but he could be more involved in the offense Thursday now that rookie quarterback Gardner Minshew has proved that he can be a passing threat and could draw more attention from opposing defenses.

It would be worth considering making a prop bet in favor of Fournette having a strong showing on Thursday, such as the Jaguars running back scoring a touchdown or being the first player to score in the matchup (which can be found on Oddschecker).

Fournette doesn't have a touchdown yet this season, and this seems like a great matchup for him to break through, as the Titans gave up 142 rushing yards to Colts running backs last week. So, while the Jags may not win, feel safe betting on Fournette to find the end zone and have a solid game.

There are also some prop bets worth considering for Sunday's games.

The most exciting matchup of the week features the Kansas City Chiefs hosting the Baltimore Ravens in a battle of two of the top teams in the AFC. This game has the potential to turn into a shootout with both teams putting up a lot of points.

That's because Chiefs quarterback Patrick Mahomes and Ravens quarterback Lamar Jackson have both gotten off to terrific starts and are two of the most exciting players in the NFL.

It wouldn't be surprising to see this game come down to the wire, so a fun prop bet to make would be on the team that scores last (found on Oddschecker). That final score could be crucial in this game if the contest is as back and forth as expected. And it's likely the Chiefs could use a final score to seal the game in the closing minutes.

Another matchup that could feature a lot of scoring is the game between the Houston Texans and Los Angeles Chargers. Both teams made the AFC playoffs last year and should contend for spots this season, and they'll do so by relying on their offenses.

Because of that, prop bets featuring yardage and scoring totals should be good investments by betting on the overs. Quite a few star players have the opportunity to put up big numbers in this one, so several player bets on Oddschecker are worth taking a chance on.