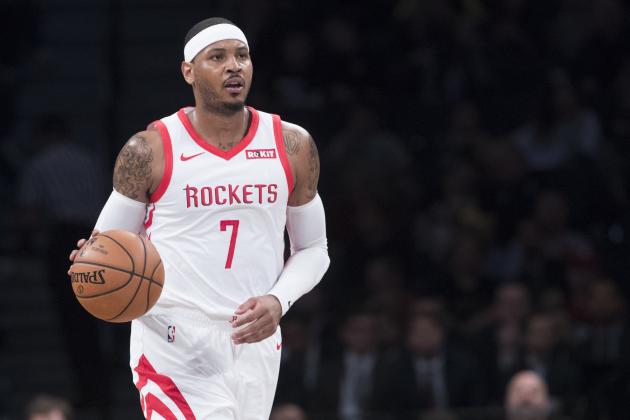 There are reportedly "several" Brooklyn Nets players who are "fully in favor" of the team signing free-agent forward Carmelo Anthony for the 2019-20 NBA season.

Ian Begley of SNY reported the update Wednesday and added the Nets front office's level of interest in the 10-time All-Star is "unknown."

In August, Anthony told ESPN's Stephen A. Smith on First Take that his unceremonious exit from the Houston Rockets last season, which led to an extended stay on the free-agent market after he was waived by the Chicago Bulls, forced him to consider his future, but he concluded it's not time for retirement.

"I know I can still play," Melo said.

Anthony proceeded to join the New York Knicks, his team from 2011 through 2017, for informal five-on-five scrimmages in late August, per Jake Fischer of Sports Illustrated.

Begley noted the Knicks' interest in a potential reunion with the 35-year-old New York City native was tied to a blockbuster offseason. Since New York didn't acquire multiple superstars such as Kevin Durant and Kyrie Irving, it's unlikely Melo will rejoin the organization.

Along with the Nets and Knicks, the 2012-13 NBA scoring champion has been linked to the Los Angeles Clippers and Los Angeles Lakers, while his representatives spoke with the Philadelphia 76ers, according to Frank Isola of The Athletic.

That said, there's been nothing to indicate a deal with any of those teams is imminent with NBA training camps set to open at month's end.

Anthony has the skill set to become a useful offensive sparkplug off the bench for a contender, but his unsuccessful stint with the Rockets raised questions about whether he could thrive in that role after spending most of his career as his team's go-to scoring option.

Brooklyn may represent the best fit since Durant's ruptured Achilles could keep him sidelined for the entire season, creating a major need for wing scoring alongside Irving.