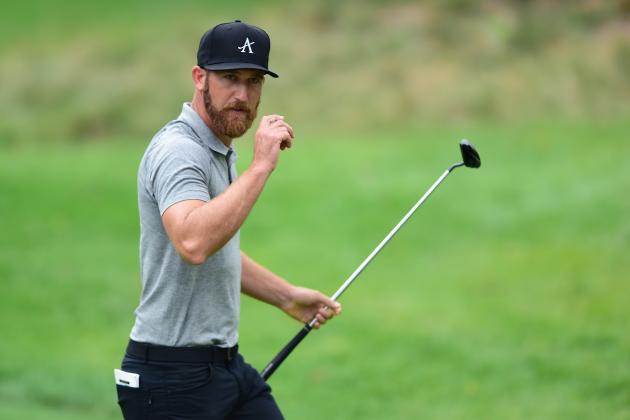 Kevin Chappell moved into fifth place Friday in the Military Tribute at The Greenbrier in White Sulphur Springs, West Virginia, after carding an 11-under 59.

This was Chappell's first PGA Tour event since the Mayakoba Golf Classic last November. He underwent a microdiscectomy surgery to alleviate his back pain and returned to competitive action in August on the Korn Ferry Tour.

Chappell earned a par on his opening hole Friday before reeling off nine straight birdies. He added birdies on the fifth and seventh holes before heading to the clubhouse.

History is within reach for @Kevin_Chappell.

He makes his 11th birdie of the day and needs to finish par-par to shoot 59.#59Watch pic.twitter.com/Nb4ol6yL0V

"All in all couldn't be happier with where I'm at and more proud of myself to do what I did today," the 33-year-old told reporters of his performance. "Ten months ago I was on the couch and couldn't walk."

Chappell finished one stroke short of tying the PGA Tour's single-round record and is the 10th golfer to finish on 59. Jim Furyk hit 58 in the final round of the 2016 Travelers Championship.

Ben Everill of PGATour.com noted Chappell did claim a piece of history with his nine consecutive birdies. Mark Calcavecchia is the only other golfer to achieve the feat in a Tour event when he pulled it off in the second round of the 2009 RBC Canadian Open.

Chappell's story may not be over in West Virginia. Heading into the weekend, he's three shots back of Scottie Scheffler for the lead. A second career PGA Tour victory is within reach.

We'd like to send you the most entertaining High School Sports articles, videos, and podcasts from around the web.