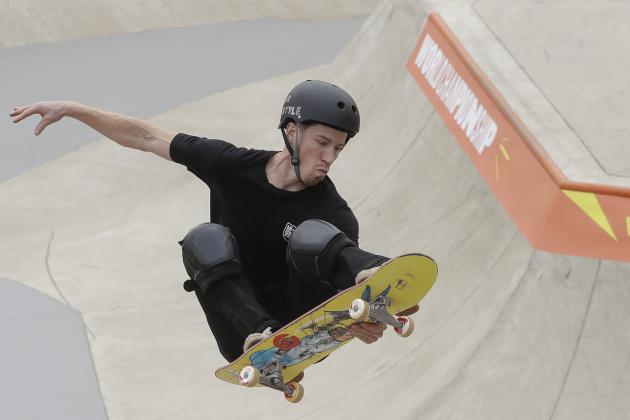 Shaun White did just enough in the quarterfinals of the men's park event at the 2019 World Skateboarding Championships in Sao Paulo, Brazil, on Friday to qualify for Saturday's semifinals.

With a score of 80.00, White finished 16th among the 32 competitors, making him one of 17 skateboarders to reach the semis.

Here is a rundown of the top 17 finishers from the quarterfinal round with full results available at WorldSkate.org:

The United States' six semifinal qualifiers were the most of any country, while host nation Brazil was second with three.

White took a slight step back after finishing 13th in the open qualifiers Thursday, but he will still have a chance to compete in Sunday's final if he can finish inside the top eight Saturday.

With a good finish in Brazil, White can improve his spot in the world rankings in hopes of qualifying for the 2020 Summer Olympics in Tokyo, where park and street skateboarding will make their Olympic debuts.

White, 33, is best known for his excellence in snowboarding as the three-time Olympic gold medalist in the halfpipe, most recently talking gold at the 2018 Winter Games in Pyeongchang, South Korea.

He also has plenty of experience in skateboarding, though, including five X Games medals. White has won two golds, two silvers and one bronze in the vert, although vert will not be part of the Olympic program.

Instead, White has transitioned to park in hopes of becoming part of a small and elite class of athletes who have competed in both the Summer and Winter Olympics.

While switching disciplines is a major challenge, White told Olympic.org in February that it added to the enjoyment:

"It's a different type of skating [in Tokyo] to what I did previously, which was vert skating, the big ramps. Now I'm doing bowl skating which is rad, it’s so much fun.

"I don't think I'd have the same enthusiasm if it was vert. Vert is a similar mentality to halfpipe, skating bowl is more like slopestyle, so there's some variety. Every park you show up to is totally different, there's a new line, something to be sought out."

It isn't often that White is lacking in terms of experience against his competition, but that has been the case in Brazil. Even so, he finds himself one step away from the finals.

White is undoubtedly an underdog given where he finished in the qualifiers and quarterfinals, but finishing in the top eight Saturday would give him a big boost in his quest to make the 2020 Summer Olympics as a skateboarder.