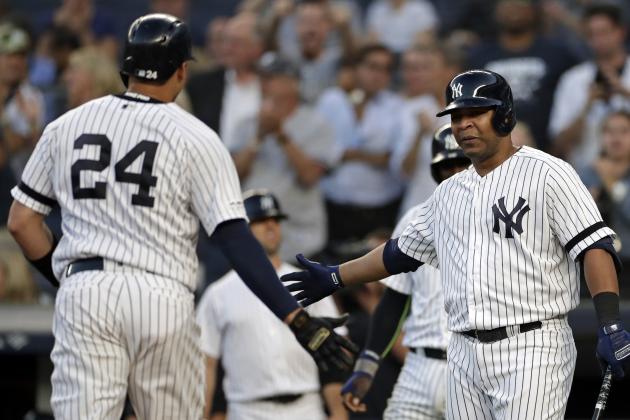 The New York Yankees will be without the services of Edwin Encarnacion and Gary Sanchez for the time being.

Gary Sanchez has a groin strain similar to his last one. But Aaron Boone said he’s “optimistic” Sanchez will be back before season ends. Edwin Encarnacion has a “mild” oblique strain, per Boone.

Boone added that Encarnacion's oblique strain is considered minor but could keep him out for the remainder of the season, per Newsday's Erik Boland.

The Yankees are all but assured of an American League East title. They're 10 games up on the second-place Tampa Bay Rays with 14 games left until the postseason.

New York announced Austin Romine would start at catcher and Luke Voit at designated hitter for Friday's game against the Toronto Blue Jays.

Because of its healthy division lead, the team doesn't need to rush Sanchez or Encarnacion back, but getting them on the field for the playoffs would obviously be a nice luxury.

Sanchez and Encarnacion have identical .531 slugging percentages. The former is second on the team in home runs (34) and third in RBI (77), while the latter has 34 homers and 86 RBI between his time with the Yankees and Seattle Mariners.