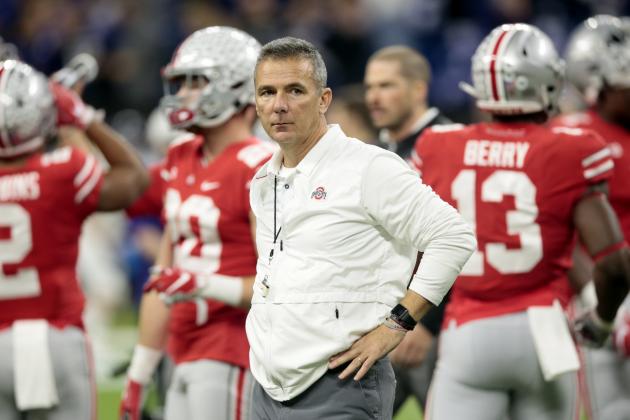 Former Ohio State Buckeyes head coach and current Fox analyst Urban Meyer has gone on the record and said he believes he is 100 percent done with coaching. Based on recent comments, though, it seems he has not ruled out a return to the sideline.

"I'm not there at the moment," Meyer said of possibly returning to coaching, per Cleveland.com's Doug Lesmerises. "Like you said, next year can I say that? We'll talk again next year, and we'll see."

Meyer stepped down following the 2018 campaign after seven years with the Buckeyes. The 55-year-old revealed last October that an arachnoid cyst in his brain had flared up over last two years, causing him frequent pain.

Last season was overshadowed by allegations that former assistant coach Zach Smith abused his ex-wife, Courtney, who said Meyer and wife Shelley knew about the history of domestic violence. Meyer was suspended for the first three games of the campaign for his handling of the situation.

During his time in Columbus, Meyer went 83-9, winning three Big Ten titles and one national championship.

With a victory in his first #RoseBowl game, Urban Meyer has coached his final game with the Ohio State Buckeyes. Thank you, Urban Meyer for the last seven years. | https://t.co/LS1A6mzPhv #OSUvsWASH #10TV pic.twitter.com/R0n8Obozr3

When Meyer announced his retirement in December, he said he felt "certain" that the Rose Bowl would be his last game.

"I believe I will not coach again," Meyer told reporters.

He reiterated that stance nearly a month later, saying "I do believe I'm done" following a victory in The Granddaddy of Them All.

This season is the first time since 2011 that he has not been on the sideline, and it has left him wondering if he is making the most of his time.

"I worry about that. I worry about that," Meyer said, per Lesmerises. "That only thing that still gets me a little bit is, 'Am I making an impact?' That’s what I miss more than anything. I miss winning, and I miss that."

Meyer has been frequently linked to the USC Trojans' job.

Clay Helton has been the program's head coach since October 2015, when he took over for a fired Steve Sarkisian, compiling a 34-17 record. Though the Trojans managed double-digit victories in each of Helton's first two full seasons, they stumbled to a 5-7 finish in 2018 and ended the year below .500 for the first time since 2000.

The pressure appears to be on Helton, as Lynn Swann recently resigned from his role as USC's athletic director. The Trojans have started 2-0, but should they struggle later in the season, the Meyer rumors may swirl in Southern California.

Follow Ohio State Football from B/R on Facebook and get the latest updates straight to your newsfeed!

We'd like to send you the most entertaining Ohio State Football articles, videos, and podcasts from around the web.