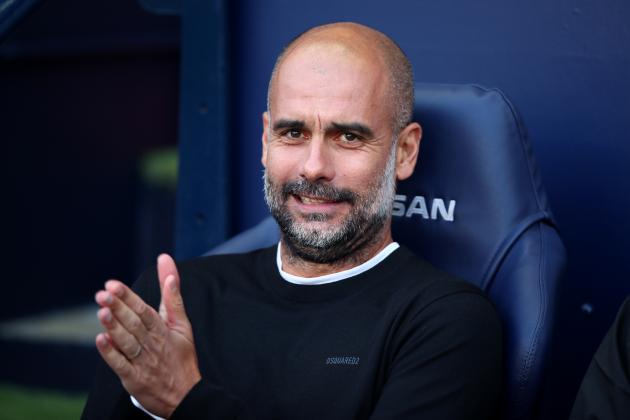 Samuel Eto'o wasn't always complimentary about his time working with Pep Guardiola, but the latter has hailed the retired striker as "one of the best."

Guardiola, who coached Eto'o at Barcelona during the 2008/09 campaign, lauded Eto'o's qualities Friday, per Goal's Kunle Fayiga: "Incredible player, outstanding striker, one of the best I met and have seen, personality, character, top scorer, more pressure, better performance. I had him for one season."

It's quite the tribute to the 38-year-old who announced his retirement Saturday. Eto'o left the game after winning the UEFA Champions League twice with Barcelona, once on Guardiola's watch.

During 2009, the Cameroon international formed a lethal front three with Thierry Henry and Lionel Messi. It was Eto'o who opened the scoring when Barca beat Manchester United 2-0 in the final.

The victory capped a treble of La Liga, Copa del Rey and Champions League titles for Guardiola's team. Despite the success, Eto'o has often offered negative memories of his time with Guardiola.

As recently as April, Eto'o told beIN Sports (h/t MailOnline's Kate McGreavy): "Pep has lived his whole life in Barcelona, but in the years I spent in Barca, he didn't understand the team."

Eto'o had stronger words for his one-time boss in 2014, when he told beIN Sports (h/t ESPN.co.uk): "Guardiola has never had the courage to say things in front of me."

Any tensions between the pair at the time were likely increased when Guardiola sold Eto'o to Inter Milan as part of a deal that saw Zlatan Ibrahimovic move to the Camp Nou. While Ibrahimovic floundered, Eto'o's impact with the Nerazzurri was instant, with the Serie A side winning the treble thanks in part to eliminating Guardiola's Barcelona in the last four of the Champions League.

Samuel Eto'o has officially announced his retirement from football.

Throwback to when he won back-to-back trebles 🏆🏆🏆 pic.twitter.com/ugEjwkJKTm

Eto'o worked with Guardiola's main contemporary rival at Inter, Jose Mourinho. While he's often taken Guardiola to task, Eto'o still has nothing but praise for Mourinho, whom he also played for at Chelsea during the 2013/14 season.

Never forget Samuel Eto'o's iconic goal celebration back in 2014 in response to a Jose Mourinho jibe about being too old.

He scored in a 4-0 win over Tottenham by doing an 'old man' celebration, bent over and walking slowly with an imaginary cane towards the corner flag.

Speaking on Thursday, Eto'o said Mourinho returning to Barca, where he hasn't worked since 2000, "would be beautiful," per Sport.

While Eto'o appeared to make Guardiola's decision to sell him look foolish by winning big with Inter in 2010, the latter's choice was equally vindicated a year later. Barca won another Champions League title in 2011 with Messi having replaced Eto'o as the focal point in attack.

If there are still hurt feelings between the two, they are probably wasted. It's more likely Guardiola and Eto'o were never going to smoothly co-exist because timing was against them.

Guardiola took over in Barcelona just as Messi was emerging as arguably the best player on the planet. At the same time, Eto'o's influence was beginning to wane, with Pedro and Andres Iniesta playing bigger roles in how the team created and took chances. 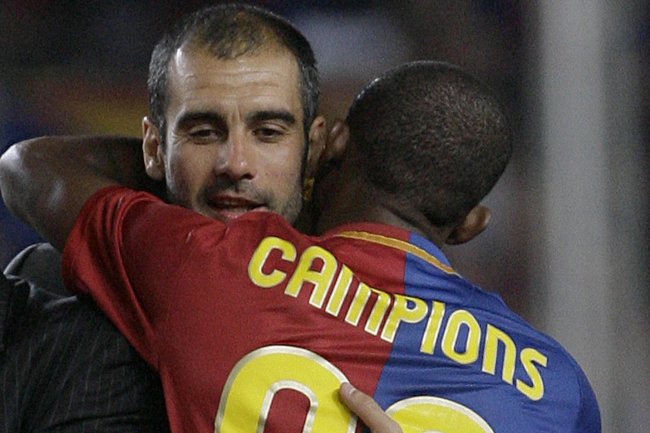 JOSEP LAGO/Getty Images
Guardiola has lauded the quality Eto'o showed during the 2008/09 season.

There were tough choices to make about the direction Barcelona would go in a bid to dominate Europe beyond 2009. It's also true being able to offload a striker of Eto'o's talent merely underlines the embarrassment of riches Guardiola had at his disposal during the era.

With so many stars, it was inevitable some marquee names would be pushed aside, even though Guardiola still sounds grateful to the man who helped inspire his first great success in the dugout.