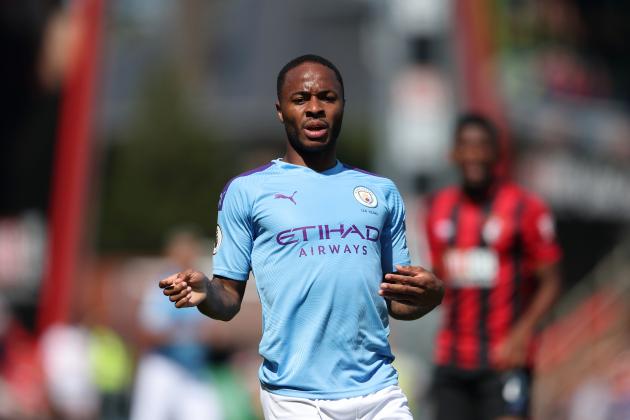 Raheem Sterling is producing stunning form for both club and country, but Pep Guardiola doesn't want the Manchester City winger to get carried away by comparisons to Cristiano Ronaldo and Lionel Messi.

City boss Guardiola was responding to England manager Gareth Southgate saying Sterling can reach the level of the two best players of the modern era, per Sky Sports News: "Hopefully he cannot read too much and listen to these kind of things, it would be good for him. Nobody can compare with Cristiano [Ronaldo] and [Lionel] Messi."

Those words of caution come after Sterling scored one and helped create three other goals during England's 5-3 win over Kosovo at Wembley Stadium on Tuesday. The performance prompted Southgate to herald Sterling as capable of joining the ranks of the game's elite, per Sami Mokbel of the Daily Mail.

Sterling's exploits followed a goal and an assist during Saturday's 4-0 victory over Bulgaria.

While Guardiola is right to say few, if any, can match the exploits of Barcelona talisman Messi and Juventus ace Ronaldo, there's no doubt Sterling is headed in a similar direction. He has overtaken striker Sergio Aguero as the most feared attacker in the City squad thanks to the pace, variety and timing of his runs off the ball.

Sterling's intelligent movement routinely puts him in the best positions to score. Yet it's his rapidly improving quality as a finisher that has taken his game up a level.

No longer hesitant and clumsy in front of goal, Sterling is calm, assured and decisive when chances come his way. Those traits have helped him find the net six times for the Citizens already this season to go with his exceptional displays on the international stage.

Signed when Manuel Pellegrini was in charge in 2015, it's fair to say Sterling's career has kicked on considerably ever since Guardiola took over a year later. Through prodding, instructive coaching and faith in his ability, Guardiola has made Sterling the true focal point of his team, the player positioned to cap City's flowing, pass-heavy moves.

Naturally, Guardiola is pleased with how well Sterling has developed: "I'm so happy with what he's been doing since we've been together. Everything that has happened to him is good because he has an incredible work ethic and he's an incredibly nice guy."

Guardiola wants to keep Sterling grounded, but some, including former City winger Trevor Sinclair, believes lofty expectations will continue to be set for the player as long as he performs this well:

While Guardiola is right to temper the hype somewhat, Sterling is the ideal player in the right team to continue perpetuating the numbers and performances sure to keep him in the conversation about which players belong in the same bracket as Ronaldo and Messi.

We'd like to send you the most entertaining Manchester City articles, videos, and podcasts from around the web.