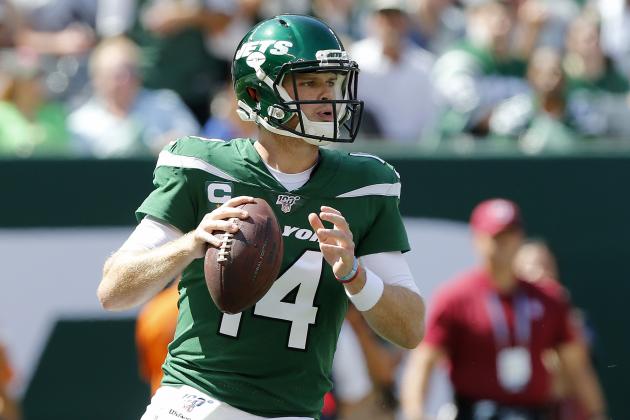 New York Jets quarterback Sam Darnold is not expected to be placed on injured reserve as he deals with mononucleosis, but the team has no plans on rushing him back onto the field.

"It's not going to be that long" Gase told reporters Friday, per Danny Abriano of SNY.

No exact timetable has been given for the second-year signal-caller's return, though he has already been ruled out of Monday night's showdown with the Cleveland Browns. According to Brian Costello of the New York Post, the passer could be out "several weeks."

Gase, per ESPN's Rich Cimini, revealed Thursday that Darnold had lost five pounds recently, something that caught the 22-year-old's attention. After the team initially held him out of practice on Wednesday due to "strep throat," he was officially diagnosed with mono later that night.

Per Adam Gase: Sam Darnold has mono and will miss Monday's game against the Browns, and perhaps more.pic.twitter.com/FPlcYoibws

The team has since sent Darnold home in effort to keep the disease from spreading.

Cimini noted the main concern with mono is an enlarged spleen, which could rupture with contact to the midsection as Darnold recovers.

"He is not going to be put out there to where something like that could happen," New York coach Adam Gase said Friday while referring to concerns about mono potentially leading to Darnold's spleen rupturing, per Cimini.

Darnold was able to play in the Jets' season opener last Sunday, a 17-16 loss to the Buffalo Bills. The 2018 third overall pick completed 28 of 41 pass attempts for 175 yards, one touchdown and zero interceptions. He was sacked four times in the loss.

Trevor Siemian—who went 13-11 in 24 career starts for the Denver Broncos from 2016 to 2017—will start in place of Darnold on Monday night. 2018 sixth-round pick Luke Falk will be elevated to second-string for the time being.

According to Cimini, the Jets plan on signing a third quarterback ahead of a Week 3 clash with the New England Patriots. Of note, New York has a bye week in Week 4.

Follow New York Jets from B/R on Facebook and get the latest updates straight to your newsfeed!

We'd like to send you the most entertaining New York Jets articles, videos, and podcasts from around the web.