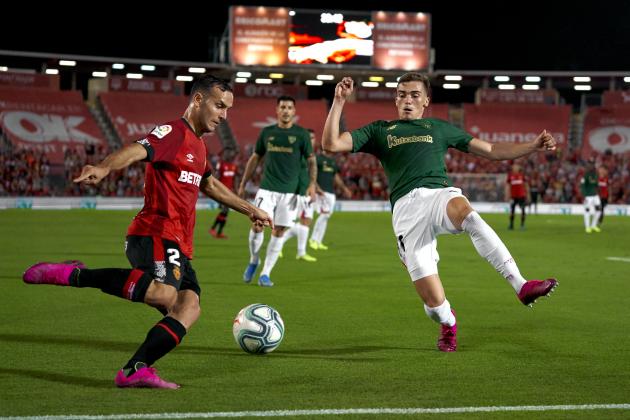 Athletic Bilbao missed the chance to move to the top of La Liga on Friday as Mallorca held them to a goalless draw at the Iberostar Stadium.

Striker Aritz Aduriz missed a stoppage-time penalty for the visitors, while Mallorca substitute Abdon Prats also saw a spot-kick saved in the second half.

Athletic Bilbao remain in second place and are still unbeaten after four games, while Mallorca have now gone three matches without a goal in La Liga.

Our @AritzAduriz11 has been honored by @RCD_Mallorca before the match 👏

Yet the pleasantries were quickly forgotten once the match had started. Mallorca midfielder Dani Rodriguez managed to get his name in the book after only 43 seconds:

43 - Dani Rodríguez's yellow is the fastest yellow card won by Athletic in #LaLiga since at least 2005/2006 season (43 seconds). Infraction#AthleticClub pic.twitter.com/smZzzNu0KG

The hosts went close to an opener with just nine minutes on the clock. Lago Junior twisted past his defender down the left flank and sent in a cross for Rodriguez to head over the bar.

Athletic flickered into life towards the end of the opening 45 minutes but rarely threatened. Iker Muniain's shot from the edge of the box that flew wide of Manolo Reina's post was their best effort.

The best chance of the first half came with just minutes to go before the break. Salva Sevilla's cross was headed goalwards by Iddrisu Baba but pushed over the bar by Unai Simon.

Mallorca continued on the front foot after the break and had a glorious chance to break the deadlock on 56 minutes. A clever backheel from Aleix Febas left Junior with only the goalkeeper to beat, but he could only pull his shot across goal and wide of the post.

Yet it was the visitors who went on to produce their best moment of the match, as a stretching Raul Garcia was denied by Reina after a glorious ball in from Yeray Alvarez.

Mallorca continued to threaten and rattled the woodwork with 15 minutes remaining from a shot by Sevilla that beat Simon but hit the post.

The hosts were looking the better side and won a penalty on 79 minutes when Kubo was brought down by Yuri in the penalty area. Prats stepped up to take the kick but dragged his effort wide of the post.

Athletic hit back in the closing stages and came within a whisker of nicking all three points. Benat Etxebarria saw a shot tipped over the bar, while Gaizka Larrazabal's effort hit the ground and flew up onto the crossbar.

There was still time for more drama in a wild finish at the Iberostar Stadium. Athletic won a penalty in stoppage time after Babba was penalised for handball following a VAR review.

ESPN FC's Dermot Corrigan thought it was a debatable decision:

VAR / handball striking again as Athletic Bilbao get very debatable penalty in 92nd minute at 0-0 at Mallorca... Aduriz with ball in hand...

The decision gave Aduriz the perfect opportunity to be the hero and clinch all three points, but he put his effort too close to a diving Simon.

Mallorca then went straight up the other end and scored through Alex Alegria. However, his header was ruled out for offside as the game ended all square.

We'd like to send you the most entertaining La Liga articles, videos, and podcasts from around the web.