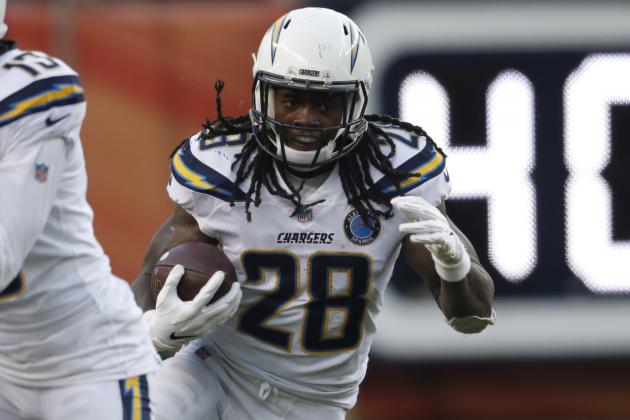 After sitting out Week 1 amid a contract standoff, Los Angeles Chargers running back Melvin Gordon intends to report to the team at some point during the 2019 regular season.

"Not a Le'Veon Bell situation," a source told ESPN's Jeremy Fowler. "He still wants to be a Charger."

A first-round pick in 2015, Gordon is currently in the final year of his rookie contract. He is scheduled to make $5.6 million in 2019, per Spotrac.

Gordon is coming off a season in which he piled up 1,375 yards from scrimmage and 14 total touchdowns. That performance not only helped L.A. go 12-4 en route to a Divisional Round appearance, but it also earned him his second Pro Bowl selection in three years.

Having felt he had earned a lucrative multiyear extension, the 26-year-old running back made it known during the offseason that he wanted a new deal—and that he was willing to hold out into the regular season if necessary.

The standoff took a turn, though, as agent Damarius Bilbo told ESPN's Josina Anderson that Gordon's camp had requested a trade in late July because they were unhappy with the team's offer of approximately $10 million per season. Ian Rapoport of NFL Network reported on Aug. 31 the Chargers had given Gordon's camp permission to explore his market.

Chargers general manager Tom Telesco made it known on Sept. 1 that the team would not negotiate any further with Gordon until after the season.

"When, or if, Melvin reports, he'll play under his current contract and then we'll just revisit it after the season," Telesco said, according to the Los Angeles Times' Jeff Miller.

Gordon opted to hold out of L.A.'s season opener against the Indianapolis Colts on Sunday. Third-year running back Austin Ekeler filled in quite nicely for Gordon, recording 58 rushing yards, 96 receiving yards and three total touchdowns in a 30-24 victory.

With no hope of reaching a new contract, Gordon has decided to "protect himself," per Fowler. It is similar to Bell's situation from a year ago, in that he sat out with his sights set on a multiyear deal. Unlike Bell (who had been tendered the franchise tag for a second consecutive year), though, Gordon is currently under contract.

According to Adam Schefter of ESPN, Gordon must show up 30 days prior to the end of the regular season for his contract not to toll, granting him unrestricted free agency next offseason. That would require him to show up for the Chargers' final five games of the season.