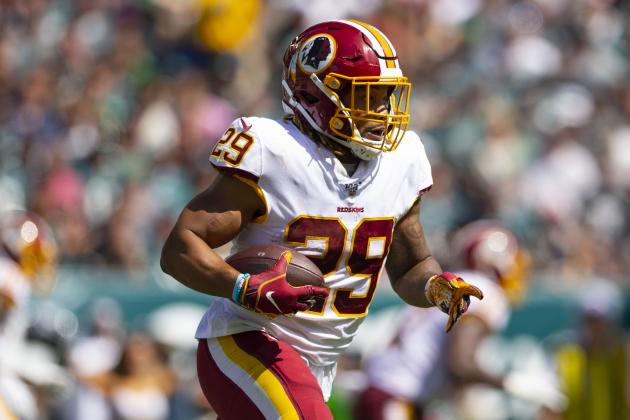 The Washington Redskins are reportedly set to place running back Derrius Guice on injured reserve after he underwent surgery on a torn meniscus in his knee Thursday, per JP Finlay of NBC Sports Washington. The move will keep him off the active 53-man roster for at least eight weeks.

ESPN's Adam Schefter reported Thursday the expected timetable for recovery from surgery on a torn meniscus is between six and eight weeks.

Guice beat out Adrian Peterson as the Redskins' starter at running back during training camp and the preseason. Peterson, a seven-time Pro Bowl selection, was a healthy scratch in Week 1.

Washington selected Guice in the second round of the 2018 NFL draft. He recorded 10 carries for 18 yards and three catches for 20 yards in Sunday's 32-27 loss to the Philadelphia Eagles. It marked his first NFL appearance after he missed all of last season with a torn ACL.

In August, Guice told ESPN's John Keim his recovery from the ACL injury taught him a lot about himself:

"I got to this stage, and I felt like I'd seen it all. I felt like I'd beaten everything that came toward me. When this happened, when the love of my life was taken away, that was the most critical thing I had to go through and overcome. Football was never taken away from me ever in 15 years of playing. This ain't no wimp injury. This is one of the most detrimental injuries out there—period. When it happened, I didn't know what to do with myself."

He'll be eligible for activation to the Redskins roster after the team's Week 9 road game against the Buffalo Bills, but Washington has its bye in Week 10, which allows for an extra week of rest and recovery.

#Redskins RB Derrius Guice had surgery to trim a torn meniscus this morning, sources say. He is in Pensacola meeting with Dr. James Andrews, who performed the procedure. Guice is out indefinitely, as the team considers its roster options.

Peterson should once again take over as the main ball-carrier for the 'Skins. He finished last season with 1,042 rushing yards, 208 receiving yards and eight total touchdowns.

Chris Thompson, who recorded seven receptions in Week 1, will continue to handle third-down duties as Washington takes on the Dallas Cowboys in its home opener Sunday.