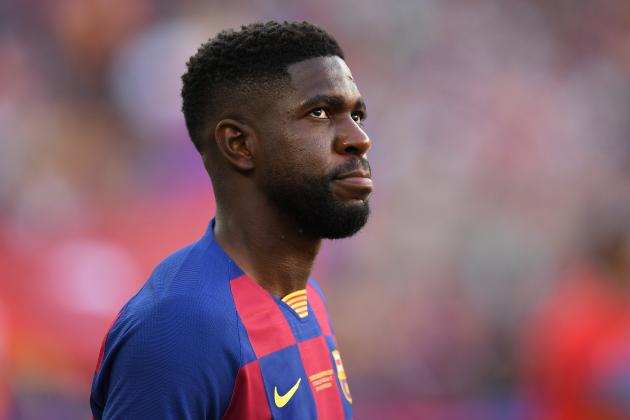 Barcelona announced on Friday that centre-back Samuel Umtiti has been ruled out of action for up to six weeks after suffering a foot injury while on international duty with France.

The centre-back was left out of the squad to face Valencia in La Liga on Saturday, and the Spanish champions offered an update on his condition on their official website: "The Frenchman continued his recovery process on Friday, and a new test diagnosed him with a small fracture to the second metatarsal of his right foot. He is set to be sidelined for 5-6 weeks."

Umtiti was not included in the initial France squad for UEFA 2020 European Championship qualifiers against Albania and Andorra but was called up after Aymeric Laporte was forced out with injury.

The centre-back did not feature in France's 4-1 win over Albania and then withdrew from the squad with a foot problem:

Barcelona initially diagnosed the injury as a "bruised foot," per the club's official website. However, it appears the problem is more serious and Umtiti is not expected back until after the next international break.

The injury will rule him out of UEFA Champions League matches against Borussia Dortmund and Inter Milan as well as La Liga meetings with Valencia, Granada, Villarreal, Getafe and Sevilla.

Umtiti missed a large chunk of last season after suffering a knee injury in November. He made his return in February but lost his place in the team to Clement Lenglet.

The former Sevilla man has also taken Umtiti's place in the French team. He started both of Les Bleus' Euro 2020 qualifiers and scored his first international goal against Andorra:

Lenglet has become first choice at Barcelona alongside Gerard Pique in central defence, but Umtiti's injury will leave manager Ernesto Valverde a little short of options in defence.

The only other recognised central defender in the first-team squad is inexperienced Frenchman Jean-Clair Todibo. The 19-year-old only joined the club in January and has only made two La Liga starts for Barcelona.