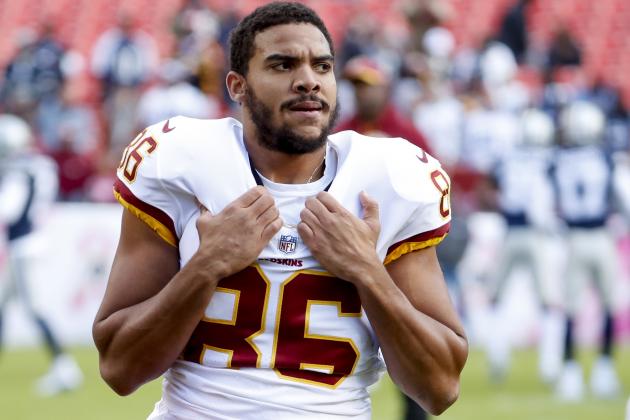 Washington tight end Jordan Reed will not play against the Dallas Cowboys in Week 2 because of a concussion, according to NBC Sports Washington's JP Finlay.

Reed has been sidelined since taking a high hit from Atlanta Falcons safety Keanu Neal during a preseason contest on Aug. 22. Neal was fined $28,075 for unnecessary roughness on the play.

Prior to Friday's update, it appeared as though Reed might make his 2019 regular-season debut on Sunday. Head coach Jay Gruden noted on Wednesday that the tight end had been making progress.

"He did a lot of team [drills] today, which is good," Gruden said, per the Associated Press. "He's just got to continue to get more reps, and then we'll continue to monitor how he's feeling afterward."

Despite promising signs, the team made it clear it would not put the 29-year-old at risk.

"We would never put Jordan at risk any time, any place, if we thought there was going to be a future problem," Gruden added. "But once he gets cleared and he feels good enough to go, he'll go."

Ultimately, Reed was not able to clear concussion protocol in time for an important NFC East showdown.

Reed has proven to be a productive playmaker, piling up 465-plus yards in five of his first six seasons in the nation's capital. He is coming off a season that saw him haul in 54 catches for 558 yards and two touchdowns.

A healthy Jordan Reed would be a major boost to the offense in Washington this season. pic.twitter.com/XCky1roXjZ

Playing without Reed will be a blow to the Washington offense, as he has been especially productive against Dallas through the years. His 534 receiving yards in 10 career games against the Cowboys are his most against any team.

Unfortunately for him, though, he has been hampered by injuries throughout his career. He has never made more than 14 appearances in a single season, and he has now missed approximately one-third of his career games (33 of 98).

Reed's next chance to return to the field will come on Sept. 23, when Washington hosts the Chicago Bears on Monday Night Football.

With Reed sidelined, Washington will once again rely on two-time Pro Bowler Vernon Davis (four catches, 59 yards and one touchdown in Week 1) to fill in at tight end. Jeremy Sprinkle (one catch for eight yards) will likely serve as the backup, though the team signed Donald Parham to the practice squad on Thursday.