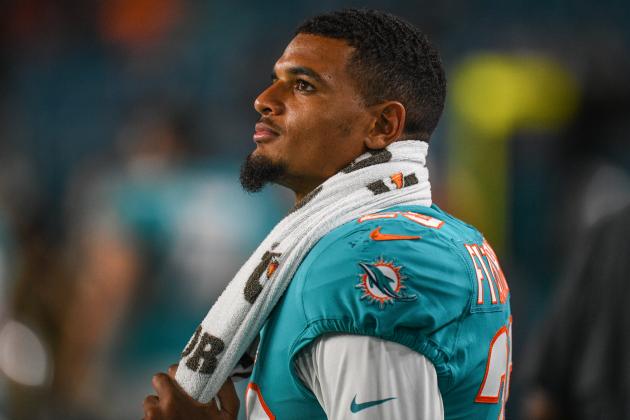 On Thursday, ESPN's Chris Mortensen reported the Dolphins gave Fitzpatrick and his agent, Joel Segal, an opportunity to seek potential trade partners, but so far teams have been hesitant because Miami's asking price includes a first-round draft pick.

"It's a little frustration, but I have to shift my focus to what's important," Fitzpatrick said, per Safid Deen of the South Florida Sun Sentinel. "I can't focus on the trade talks and everything else like that. I have to focus on the Patriots, my teammates, my coaches and this week's game plan."

The 22-year-old University of Alabama product, whom the Dolphins selected with the 11th overall pick in the 2018 NFL draft, has grown unhappy with a role that's included playing multiple positions in the defensive backfield within the same game, per Mortensen.

He finished his rookie season with 80 tackles, nine passes defended and two interceptions, including one he returned for a touchdown against the Minnesota Vikings.

In August, he defended his mother, Melissa Fitzpatrick, after she made a Twitter post about her son being miscast as a strong safety during his second NFL training camp.

"She's being honest and saying how she feels. There's nothing wrong with it," the 2017 Chuck Bednarik Award winner told reporters. "I wish she would have addressed me first and talked to me first before it happens, but it is what it is. She feels very strongly."

He added: "She's not wrong. Coach has asked me do something right now. I got to do what they ask me to do. If we have to have some discussions in the future, we'll have those discussions."

The 2019 NFL trade deadline is scheduled for Oct. 29 at 4 p.m. ET. That's one day after the Dolphins play on Monday Night Football in Week 8 against the Pittsburgh Steelers in what could be a final audition for Fitzpatrick if he's still looking for a trade out of Miami.

For now, he'll remain a key piece of the Dolphins defense, though it'll be interesting to see whether his concerns lead to a more consistent role against Tom Brady and the high-powered Patriots.