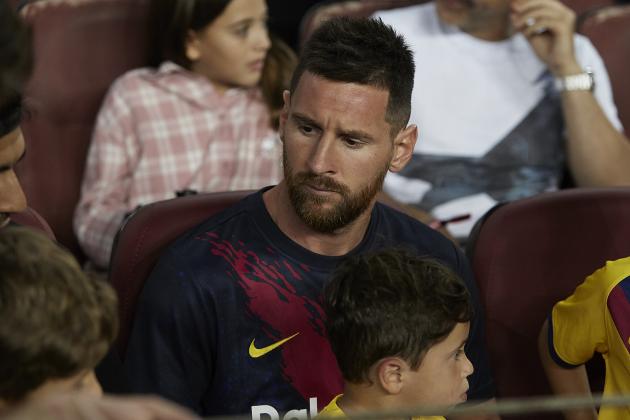 Valverde told reporters that the club are not willing to take any risks with the Argentine, who suffered a calf injury in pre-season and is yet to feature for the Spanish champions in 2019-20.

"I am not a doctor but it seems that the scar was opened a little and that made us more cautious. In terms of him being able to return, I don't know if it will be Tuesday or maybe later," he said. "I don't want to say anything to lower expectations, but I find it difficult for Tuesday."

The news will be a blow to Barcelona as they have struggled without their talisman this season. Athletic Bilbao beat the Catalan giants 1-0 in their season opener, and they also dropped points in a 2-2 draw with newly promoted Osasuna last time out.

Valverde told reporters after the match that his team had been "awful" in the draw at El Sadar Stadium and "should have been more assertive on the pitch and kept on attacking."

Barcelona now face a tricky test in La Liga on Saturday against Valencia, the team who beat them 2-1 in the Copa del Rey final in May, before they head to Dortmund.

Lucien Favre's side will also present a stern challenge in front of their own fans at the Westfalenstadion, particularly with former Barcelona striker Paco Alcacer in superb form:

Yet Barcelona will be desperate for success in European this season after painful defeats to Liverpool and Roma in the last two seasons in the competition:

While the club have dominated La Liga, winning the title in four of the last five years, they have not lifted the European Cup since 2015 despite having Messi in the team.

Messi was again crucial to their run to the semi-final last season. He was the competition's top scorer with 12 goals and was named UEFA's Champions League Forward of the Season:

Yet Barcelona look as though they will have to cope with the 32-year-old in Germany. The onus will be on new signing Antoine Griezmann to score the goals, particularly as Luis Suarez has a poor record away from home in the competition:

Barcelona have been handed a tough draw in the Champions League with Dortmund, Inter Milan and Slavia Prague also in Group F. They will still be expected to top the group but a poor result in their opening game will put pressure on the team after a slow start to their La Liga title.