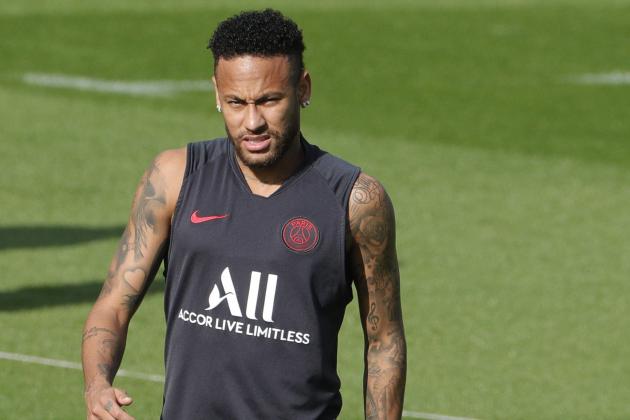 Neymar is ready to make his return from injury for Paris Saint-Germain against Strasbourg in Ligue 1 on Saturday, according to manager Thomas Tuchel.

The PSG boss told reporters on Friday that the Brazil international will be in the squad for the first time this season for the match at the Parc des Princes.

"We have a big squad of players with character, talent and experience. Neymar is in the group, that is for sure. He can focus now. He needs to make his return as he is a PSG player, so he is in the squad for this one. It has not been easy for him in recent weeks, but that is life. We had the chance to speak on Thursday, but we are yet to speak today. My challenge is to speak with him about his position on the pitch when attacking and defending."

Tuchel was also asked about a possible hostile reception for Neymar from supporters and said while he "can understand the fans are not happy" with the Brazilian he "cannot influence their reaction, nor control the fans."

Supporters have been told anti-Neymar banners will not be tolerated, per Get French Football News:

PSG's largest ultra group, @CO_Ultras_Paris, have been told that the club will not tolerate anti-Neymar banners at Saturday's match vs Strasbourg; this has led to high tension, with the ultras considering boycotting the Real Madrid game - full story https://t.co/8zvFkI0bjo

Neymar has not featured for PSG this season after suffering an ankle ligament injury playing for Brazil in June. The injury kept him out of the 2019 Copa America.

The 27-year-old was also heavily linked with a move away from PSG in the summer and informed the club in July he wanted to leave after two seasons in the French capital, per Bryan Swanson at Sky Sports News.

Barcelona president Josep Maria Bartomeu said Neymar did "everything possible" to join the Spanish champions, but the club were unable to agree a deal with PSG:

Neymar will NOT join Barcelona this season, says Bartomeu ❌ pic.twitter.com/hk7ZLTMuEJ

Neymar has already been linked with a return to the Camp Nou in 2020:

Neymar 'set to take advantage of legal loophole' to force PSG exit and seal dream return to Barcelona in 2020 for £154m https://t.co/GyWV5daT4C

The Brazilian will also have angered PSG fans by telling Oh My Goal his best memory as a footballer was Barcelona's 6-1 win over the French side in the Champions League:

Neymar: "My best memory as a footballer? When we won against PSG with FC Barcelona"

The Brazilian will now stay with PSG until at least January and will need to win over supporters when he returns to the pitch.

Neymar has already impressed on his return to international action with Brazil, scoring and producing an assist in a 2-2 friendly draw with Colombia in Miami.

The PSG star also has form when it comes to taking on Strasbourg:

Absolute brilliance from @NeymarJr against Strasbourg in 2018 🧙‍♂️@PSG_English take on Strasbourg tomorrow... 👀 pic.twitter.com/eIhDGvhsEW

PSG will need Neymar to hit the ground running on Saturday, particularly as they are still without injured duo Kylian Mbappe and Edinson Cavani.

The Brazilian can expect a frosty reception from the club's supporters, but they may be more forgiving if he can find his best form on the pitch.