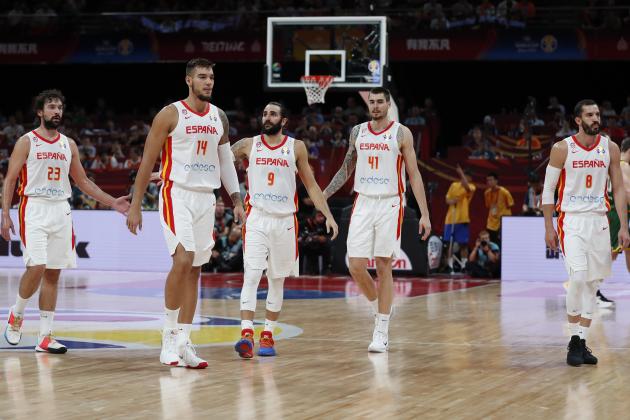 It's all come down to this.

After two weeks of intense games between 32 international teams, the championship game for the 2019 FIBA Basketball World Cup is finally set.

On Sunday, September 15, Argentina will face Spain in the Final at Wukesong Sport Arena in Beijing, China.

Argentina defeated France 80-66 on Friday to advance and Spain took down Australia 95-88 to keep their World Cup chase alive.

This will be the first time Argentina has made it to the Final since 2002 and Argentina's first time back to the title game in 13 years.

Odds via Caesars Sportsbook and all games will be live-streamed on ESPN+.

Getting past the undefeated Boomers was no easy feat for Spain, who had to push through double overtime to get the win.

Mills kept the Boomers in it, pacing them with a game-high 34 points, but Spain showed grit down the stretch behind Gasol's brilliant performance.

Look for Gasol and Rubio to lead the charge against Argentina on Sunday.

Argentinian legend Manu Ginobili was on hand cheering on his countrymen, who showed great poise against the Frenchmen, who were likely riding high after eliminating Team USA from advancing beyond the Semi-Final round.

Both Spain and Argentina have shown that they are formidable in this tournament, but there can only be one gold medal winner.

The odds favor Spain (-4.5), but Argentina looks like a well-oiled machine and they also seem to have the same chip on their shoulder that propelled them to the gold back in 2004.

Scola is playing like he's discovered the Fountain of Youth and Facundo Campazzo has been an excellent floor general. Their chemistry has really been something to watch.

Gasol and Rubio have also been maestros on the court. Both are excellent passers and they have a great supporting cast around them.

The Final will definitely be a can't miss game, with Argentina and Spain both putting on a show, but in the end, Argentina will hoist the World Cup.