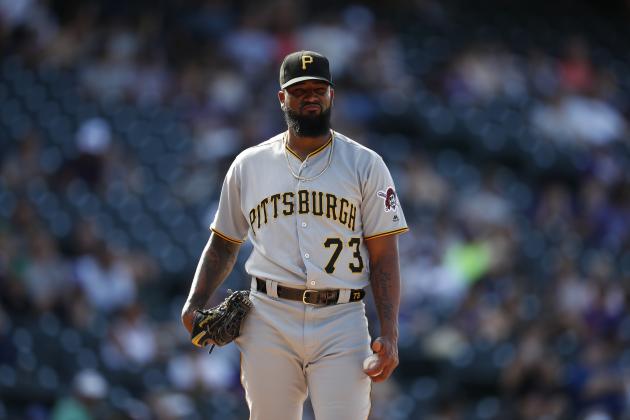 According to Nubyjas Wilborn of the Pittsburgh Post-Gazette, Vazquez asked Crick to turn off the music he was playing at his locker. An argument ensued when Crick declined his teammate's request, which ultimately led to things getting physical.

Wilborn reported Vazquez challenged Crick to hit him, though Crick declined to do so. Vazquez—a two-time All-Star—reportedly followed by throwing a pair of punches at an unsuspecting Crick, which subsequently led to retaliation.

Crick underwent extensor tendon repair surgery on his right index finger on Tuesday after being injured in the clubhouse fight. The 26-year-old right-hander is expected to miss the remainder of the season. Meanwhile, Vazquez required six stitches to his nose.

"It was one of those clubhouse altercations. A lot of bickering back and forth. Punches were thrown. At some point [you have to] stand up for yourself and start throwing them back. It's one of those deals where it’s unfortunate. There are two losers in this deal; nobody can win a fight with a teammate."

"We both ended up getting fined. I'm filing a grievance," Crick told Wilborn. "I don't think it was just. I was defending myself. If we were on the street, this would've been assault. I got swung at twice before I swung back."

This is not the first time Vazquez and Crick have had an issue this season. According to The Athletic's Rob Biertempfel, Crick was involved in an argument with bullpen coach Euclides Rojas in July after lodging complaints against Vazquez, an incident that resulted in Rojas being suspended for two games.

It's been that kind of season in Pittsburgh, as the last-place Pirates have been involved in a number of incidents.

Biertempfel noted reliever Keone Kela was suspended for two games in July after having a "heated exchange" with performance coach Hector Morales.

Pittsburgh was also involved in a pair of on-field brawls with the Cincinnati Reds, which stemmed from Pirates pitchers throwing at Reds second baseman Derek Dietrich multiple times. Of note, Kela was suspended 10 games for sparking a July 30 brawl.

We'd like to send you the most entertaining Pittsburgh Pirates articles, videos, and podcasts from around the web.