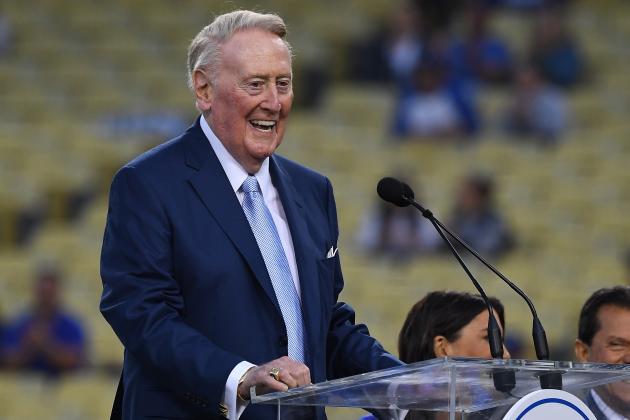 Baseball fans can own Vin Scully's first contract with the Brooklyn Dodgers.

SCP Auctions listed the contract with a starting bid of $4,000 (h/t TMZ Sports).

In a letter dated Dec. 23, 1949, Scully wrote to Dodgers president Branch Rickey, outlining his expectations upon taking over as a Dodgers' radio and television broadcaster. He asked for a salary of $100 weekly in 1950 and raises of $6,000 and $7,500 for each of the next two years.

Rickey signed the second page of the letter, certifying he agreed to the terms.

Scully joined the Dodgers in 1950 and continued to work for the franchise until retiring at the end of the 2016 season. He also called nationally televised MLB games for NBC.

One of the most legendary voices in sports, the 91-year-old won the Ford C. Frick Award in 1982, one of the highest honors afford to baseball journalists.

Baseball history would look and sound a lot different if Rickey hadn't put his signature on Scully's contract.

Follow Los Angeles Dodgers from B/R on Facebook and get the latest updates straight to your newsfeed!

We'd like to send you the most entertaining Los Angeles Dodgers articles, videos, and podcasts from around the web.