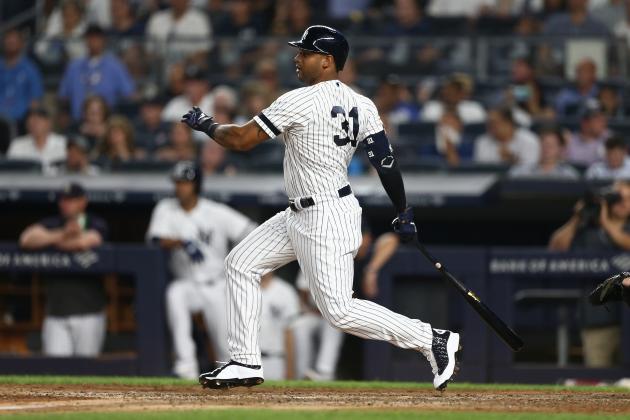 New York Yankees center fielder Aaron Hicks is likely out for the rest of the 2019 season with a flexor strain in his right elbow suffered in early August, per Joel Sherman of the New York Post.

According to Sherman, Hicks "received a recommendation to take a few more weeks of rest before a further evaluation" this week from Dr. Neal ElAttrache.

The regular season ends in three weeks, so Hicks may not receive an evaluation until around the start of the playoffs, putting the remainder of his 2019 campaign in jeopardy.

The Yanks face numerous questions in their outfield heading into the postseason.

Mike Tauchman suffered a Grade 2 calf strain Sunday and will be out for six to eight weeks, which will likely end his year.

Giancarlo Stanton may return from a right knee strain during the team's mid-September homestand, but it's unclear how much he can contribute (or how effective he can be) having played just nine games this year because of injury.

As of now, the outfield should be Cameron Maybin, Brett Gardner and Aaron Judge from left to right, with Clint Frazier and Tyler Wade in reserve roles.

The Yankees have seen 29 players land on the injured list, an all-time MLB high, per Bryan Hoch of MLB.com.

Still, the 95-51 Yankees are first in the American League East and tied atop the junior circuit with the Houston Astros heading into the season's final stretch.