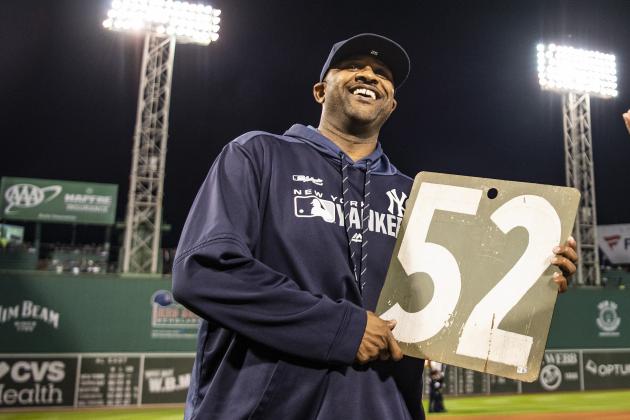 New York Yankees veteran pitcher CC Sabathia, who has made four trips to the injured list this year, said he would have already undergone season-ending surgery on his knee if the Yankees weren't playing so well.

"I think if this team wasn't in a position to win a championship, I probably would have had the surgery a long time ago," he told Dan Martin of the New York Post.

He added that his knee was holding up about as well as he could have expected coming into the year.

"This is way better than I thought," he said of the 2019 season. "I didn't think I was gonna get to this point, not with this knee. I think we knew coming into this season it was gonna be a battle. To still be able to have a chance to make starts is all I wanted."

The Yankees have needed all hands on deck, given the rash of injuries they've dealt with. Yet despite a historic number of injuries, they sit at 95-50, tied with the Houston Astros for the best record in baseball.

Another World Series ring is within grasp for Sabathia, who won his lone title with the Yankees in 2009. And if that means coming out of the bullpen, the left-hander is more than happy to oblige.

"It doesn't matter," he said. "Whatever my role is in the postseason, I'm good for it."

CC Sabathia threw a bullpen today at Fenway, which the Yanks said was "encouraging."

Could CC be a bullpen option in the playoffs? Aaron Boone didn't rule it out, saying they'll "consider everything."

CC's only career relief appearance came in the 2011 ALDS.

As for dealing with his knee issues, Sabathia said he has to deal with the pain as it comes.

"There's nothing really to manage," he said. "If you wheel me around in a wheelchair ... there's nothing I can do. It flares up when it flares up. I feel good right now and knock on wood it continues to feel good."

He described the pain he felt in an Aug. 30 loss against the Oakland Athletics as a "level 10," per Ashley Varela of NBC Sports. He added that his prevailing knee ailments were "frustrating" and continued to affect his performances.

But Sabathia persists. The Yankees could always fall short of the World Series, but having one last shot at adding a second ring is keeping him going.