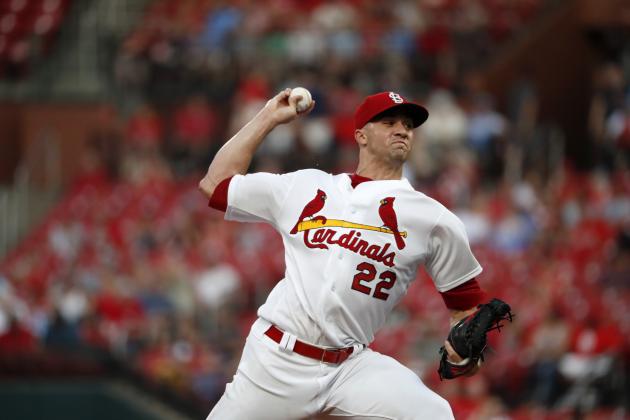 The only thing on earth hotter than the St. Louis Cardinals might be the 23-year-old hurler at the top of their starting rotation.

In fact, Jack Flaherty's hot streak predates the Cardinals' 23-8 stretch since August 9 by a month. In a dozen starts dating back to July 7, the right-hander has racked up a 0.80 ERA with 95 strikeouts and 18 walks in 78.1 innings.

"That's what pitching looks like," Cardinals manager Mike Shildt said after Flaherty shut down the Pittsburgh Pirates on Sunday to notch his second straight start of eight scoreless innings, according to Rick Hummel of the St. Louis Post-Dispatch. "Phenomenal job."

Because Flaherty started 2019 off with a 4.90 ERA through his first 17 assignments, the run he's on is probably too little, too late to make a real difference in the National League Cy Young Award race. Jacob deGrom, Max Scherzer and Hyun-Jin Ryu are still the men to beat there.

As far as the Cardinals must be concerned, however, what really matters is their previously beleaguered rotation now has a clear No. 1 for the postseason, not to mention 2020 and beyond.

It's not the biggest surprise Flaherty has found a groove as a major league ace. He was a first-round pick in 2014 and a consensus top-100 prospect by 2018. Last year also saw him embark on a rookie season that featured a 3.34 ERA and 182 strikeouts in 151 innings.

In light of these things, the real surprise was how much Flaherty struggled through the first three months of this season.

He was still missing bats with 101 strikeouts in 90 innings, and even his walk rate (3.1 per nine innings) wasn't terrible. Yet he was getting crushed when hitters made contact against him. He served up 19 home runs and an overall hard-hit rate of 40.7 percent.

Since July 7, however, Flaherty's hard-hit rate has dropped to 34.5 percent and he's had only four balls go over the fence. When paired with his slightly improved strikeout and walk rates, a more complete picture of pitching dominance emerges.

What makes this particular picture so fascinating is how Flaherty didn't have to change his true colors to paint it. He's a fastball-slider guy at heart and even more so now. Those two pitches accounted for 74.3 percent of his pitches when he was cold to 75.5 percent during his hot streak.

What has changed is these pitches' effectiveness against opposing hitters. That's best measured via Statcast's xwOBA metric, which is based on strikeouts, walks and contact quality: 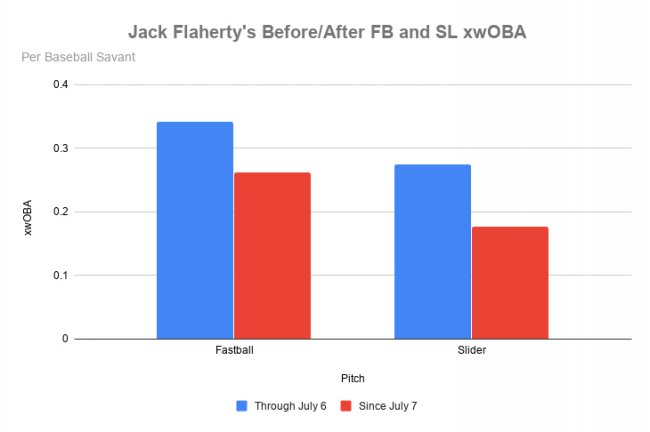 Flaherty's initial problem had nothing to do with the individual quality of his fastball and slider. Thanks to the extension he gets out of his 6'4" frame, his heater averages an elite 95.2 mph in "perceived" velocity. His slider, meanwhile, can render even the best hitters helpless.

Which brings us to an obligatory GIF from the Pitching Ninja, Rob Friedman:

According to Flaherty himself, the issue he was having earlier in the year was more so related to how he was using his fastball and slider in tandem with one another. He hinted as much when he was asked last month about his improving returns on his slider.

When he says "execute," he's referring to his ability to hit his spots. To this end, Joe Schwarz of The Athletic wrote about how Flaherty has displayed an overall improvement with his command since the All-Star break.

More specifically, there's been a noticeable shift in the location patterns of his fastball and slider: 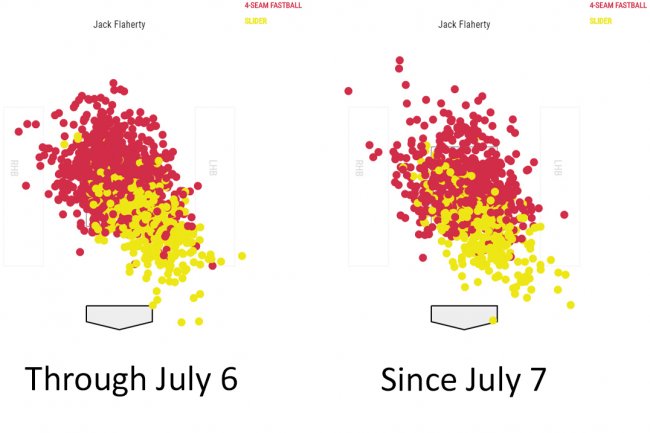 From a right-handed batter's perspective, Flaherty was primarily working up-and-in with his fastball and low-and-away with his slider earlier in 2019. More recently, he's effectively closed the location gap between the two pitches.

This might seem counterintuitive, but the benefit is in what happens when the two pitches are on their way to the plate. To a greater degree than earlier in the year, Flaherty is "tunneling" his fastball and slider now. As in, putting them on the same plane and making it harder for hitters to determine what's coming.

As Friedman illustrated, Flaherty is doing this to hitters now:

As if Flaherty's devastating fastball-slider combination weren't enough for hitters to contend with, his two-seamer and curveball are more than just extra show-me pitches. The latter has above-average vertical and horizontal movement. The former has been known to act like a heatseeking missile.

This is to say Flaherty hasn't lucked into his extraordinary results over the last two months. Since July 7, he leads all qualified (i.e., min. 200 batters faced) National League hurlers with a .236 xwOBA. He likewise leads his NL peers in wins above replacement, according to FanGraphs.

As long as that remains the case, the Cardinals' No. 1 is as good as anyone else's.

Follow St Louis Cardinals from B/R on Facebook and get the latest updates straight to your newsfeed!

We'd like to send you the most entertaining St Louis Cardinals articles, videos, and podcasts from around the web.