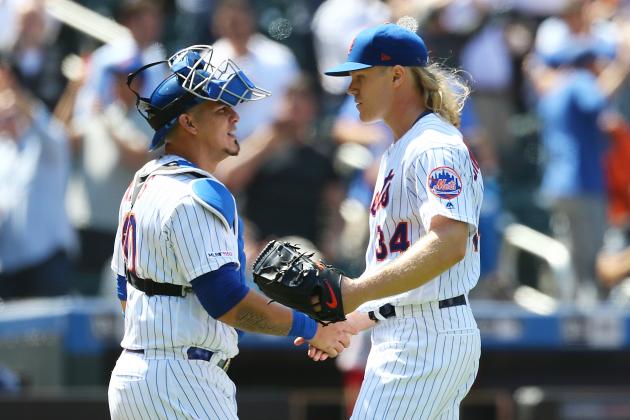 Noah Syndergaard reportedly hasn't enjoyed throwing to catcher Wilson Ramos this season, and it led to a confrontation with New York Mets leadership.

According to Joel Sherman and Kevin Kernan of the New York Post, Syndergaard was "livid" when he had to pitch to Ramos on Sunday against the Philadelphia Phillies. The right-hander first met with pitching strategist Jeremy Accardo and then manager Mickey Callaway, and he eventually had a half-hour sit-down with general manager Brodie Van Wagenen but reportedly wasn't satisfied with the results of those meetings.

Syndergaard allowed four earned runs in five innings of what became a 10-7 loss to the fellow wild-card contenders. On Monday, Callaway spoke to reporters, addressing the report regarding Syndergaard's frustrations:

With @SteveGelbs, Mickey Callaway addresses reports that Noah Syndergaard has been displeased with Wilson Ramos as his catcher:

"Noah understands that I'm going to make the lineup out" pic.twitter.com/U4VkOpj57C

Callaway added, "It's not about making guys happy. It's about winning," per Anthony DiComo of MLB.com.

His struggles with the veteran catcher have been pronounced this season, compiling a 5.09 ERA in 15 games with Ramos behind the plate. Syndergaard has been much better when throwing to backup Tomas Nido, producing a 2.45 ERA in 10 starts.

Rene Rivera caught Syndergaard for the first time this season in his previous start last Monday, resulting in seven shutout innings with 10 strikeouts and zero walks.

Despite the stark contrast, the front office "believes the pitcher-catcher dynamic is overstated," per Sherman and Kernan.

What complicates the matter is Ramos is by far the team's best offensive catching option, entering Monday with a .298 batting average, .360 on-base percentage and 14 home runs. He was on fire in August with a .434 batting average while continuing a hit streak that eventually ended at 26 games.

Considering Ramos also signed a two-year, $19 million deal in the offseason, it seems the Mets are happy to stick with their starting catcher as often as possible.

Meanwhile, the Mets considered trading Syndergaard before the July deadline, and the latest confrontation could motivate the team to make a move in the offseason despite having two more years under team control.