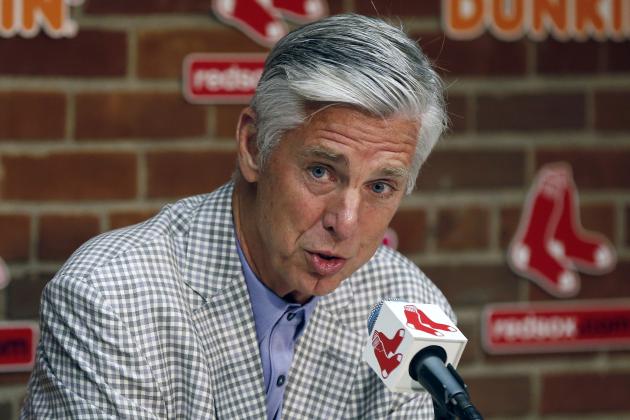 The Boston Red Sox's title defense has been a struggle all season, and it took another turn Sunday night.

ESPN's Jeff Passan reported Sunday that Dave Dombrowski is no longer the president of the team. Assistant general manager Eddie Romero was tabbed to take over as the head of baseball operations following the move. The Red Sox confirmed the news on Monday morning, with principal owner John Henry stating:

"Four years ago, we were faced with a critical decision about the direction of the franchise. We were extraordinarily fortunate to be able to bring Dave in to lead baseball operations. With a World Series Championship and three consecutive American League East titles, he has cemented what was already a Hall of Fame career."

Passan noted Romero will work in a group with Brian O'Halloran and Zack Scott, among others, to make baseball decisions. He called the trio "three of the top decision-makers with the Red Sox right now."

The Red Sox noted "a search for the next baseball operations leader will begin immediately."

The parting of ways comes after the Red Sox dropped to 76-67 and 17.5 games out of the American League East race with Sunday's 10-5 loss to the archrival New York Yankees. Star outfielder Mookie Betts was asked how this decision will impact his future with the team and said, "I love it here, but this is proof that this is a business," per Joon Lee of ESPN.

"I just found out so surprise and shock, obviously," manager Alex Cora said, per Christopher Smith of MassLive.com. "Right now I don't have too much to say. We'll talk a little bit more tomorrow. This is a guy that gave me a chance to come here and be a big league manager. It's one of those that it caught me—they just told me. So I'm not ready to talk about it."

Nobody from ownership addressed the news. Those who did— Cora, Betts, Martinez and Porcello— were in utter shock and disbelief.

Even with Boston's struggles this year, it is a shocking move.

The Red Sox hired him in August 2015 to replace Ben Cherington, and the team proceeded to win 93 games and the AL East crown in 2016. It finished with the exact same record and another division championship in 2017 before turning the corner with 108 wins and a World Series title in 2018.

Dombrowski was under contract through the 2020 campaign, per Smith, but ownership had clearly seen enough this year.

Despite this move, Dombrowski has been one of the best front-office executives in all of baseball for a generation.

He was the general manager of the Montreal Expos, Florida Marlins and Detroit Tigers before Boston, winning a World Series title with the Marlins and reaching two more Fall Classics in Detroit. R.J. Anderson of CBS Sports called his career "fantastic" and suggested fans will "likely seem him enshrined in Cooperstown some day."

Even with those accomplishments, the Red Sox are almost always "championship or bust." This year has turned into much more of a bust, and significant contracts for the likes of David Price, Nathan Eovaldi and Chris Sale, plus the fact that Betts can become a free agent following the 2020 season, will put plenty of immediate pressure on Dombrowski's successor.