Three weeks. That's all that remains of the 2019 MLB regular season, yet the playoff picture is as cloudy as ever.

A total of six American League teams and nine National League teams are currently either penciled into a postseason spot or within four games of one. Five of those teams will be watching the playoffs from home.

For now, our weekly power rankings remain fluid. Teams rise and fall based on where they were ranked the previous week. If a team keeps winning, it will keep climbing—it's as simple as that.

Here are the rankings: 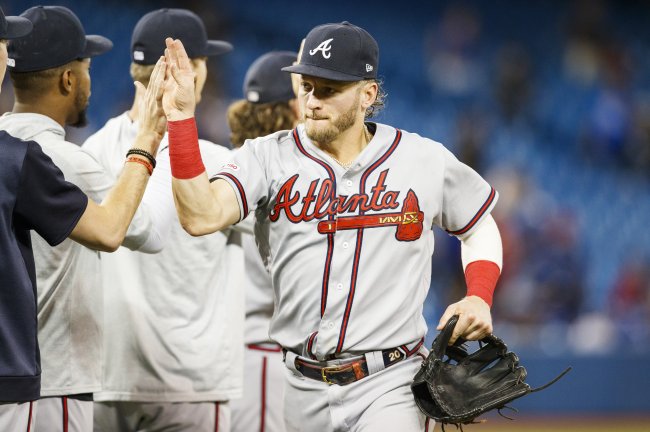 The Arizona Diamondbacks (5-1) have stormed back into the playoff picture thanks to an 11-2 record and a plus-27 run differential in their last 13 games.

They are now just 1.5 games back for the second NL wild-card spot, and with 12 of their final 19 games against sub-.500 teams—the San Diego Padres (six), Cincinnati Reds (three) and Miami Marlins (three)—they are well-positioned to sneak into the postseason.

At the top of the rankings, the Atlanta Braves (5-1) finally leap-frogged the Los Angeles Dodgers to move into the No. 3 spot and the top spot among NL squads.

The NL East-leading Braves have been nipping at the Dodgers' heels for weeks now, and after taking three of four from a red-hot Washington Nationals team over the weekend while the Dodgers dropped a series to the rival San Francisco Giants, they were finally able to pass them.

In their last 20 games, the Braves have gone 17-3, compared to an 11-9 record from the Dodgers in their last 20. So this move goes beyond just last week's performance.

The Braves were not the only contender to have a big week, with the New York Yankees (4-2), St. Louis Cardinals (5-2), Oakland Athletics (6-1) and Tampa Bay Rays (6-1) each winning both of their series.

The Houston Astros (5-1) also put together a four-game sweep of the Seattle Mariners after a quick two-game split with the Milwaukee Brewers, and they are now tied with the Yankees for the best record in baseball.

The only team from the bottom half of the rankings to walk away with two series wins was the Kansas City Royals (4-2), though it came against two of the teams ranked below them in the Detroit Tigers and Miami Marlins. Still, a series win is a series win. After going 19-7 in August, the Washington Nationals (2-5) pulled within 5.5 games of the Braves in the NL East standings at the start of September.

A 3-5 start to the month, including dropping three of four to that same Braves team that they're chasing, has widened the gap back to nine games. They have a three-game cushion for the No. 1 NL wild-card spot, but any thoughts of a division title were likely wiped out over the weekend.

The Boston Red Sox's (2-4) faint playoff hopes were all but erased with series losses to the Minnesota Twins and rival Yankees, leaving them eight games back in the wild-card race with 19 games to play.

Weekend series losses to fellow contenders dealt a blow to the Chicago Cubs' (3-3) and New York Mets' (3-3) spots in the rankings. The Cubs dropped three of four to the Milwaukee Brewers, while the Mets lost two of three to the Philadelphia Phillies.

The two teams are now positioned at the bottom of the group of 15 teams still in playoff contention, and they will need to right the ship in a hurry to avoid an October trip to the couch.

The Pittsburgh Pirates (2-4), Seattle Mariners (0-6), Colorado Rockies (1-5) and Toronto Blue Jays (0-6) all lost both series last week, with the Pirates (vs. STL), Mariners (vs. HOU) and Blue Jays (vs. TB) unable to play spoiler against contending teams.

Players of the Week 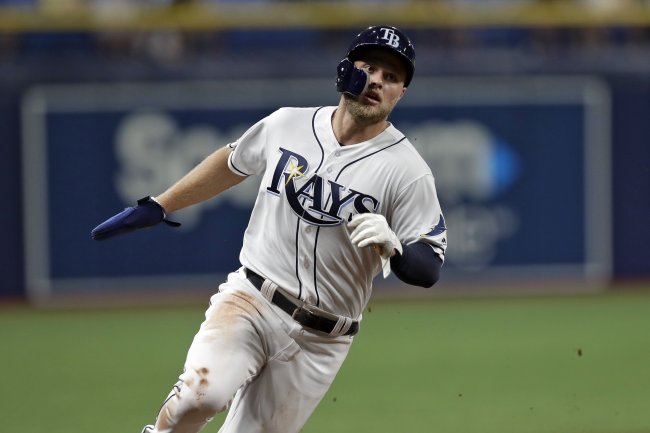 Austin Meadows has been one of the biggest breakout stars of 2019.

The 24-year-old longtime top prospect entered the season with just 59 MLB games under his belt, and despite a strong finish to the 2018 season in Tampa Bay, there was no guarantee he would hold down a spot in the Rays outfield.

He's done that and more, hitting .288/.356/.556 with 27 doubles and 28 home runs in 517 plate appearances. He's actually seen an uptick in his production since the All-Star break with a .975 OPS and 32 extra-base hits in the second half, including another big week last week.

"He's had an awesome season to date," Rays manager Kevin Cash told reporters. "Picked us up in many, many ways. He did it again tonight and hopefully, it continues for some more weeks."

As the Rays continue to chase a wild-card berth, Meadows will be counted on to spark the offense. 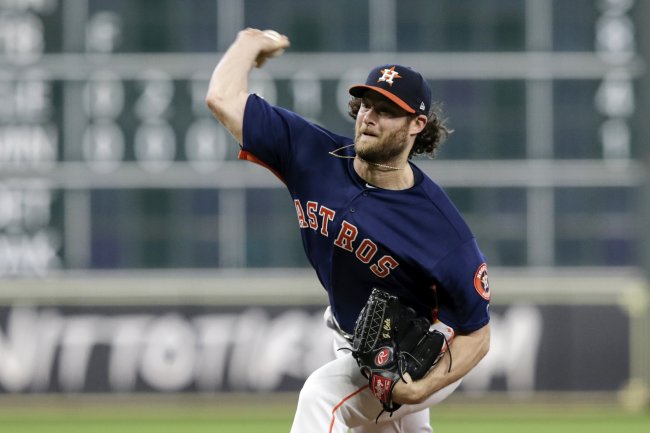 Another week, another eye-popping strikeout total from Gerrit Cole.

The headliner of the 2019-20 free-agent class leads the majors with 281 strikeouts in 184.1 innings after punching out 29 batters in 14 innings over two starts last week.

With 15 strikeouts over eight dominant innings Sunday, Cole became just the second pitcher in MLB history with three straight games of 14 or more strikeouts along with Pedro Martinez, according to Brian McTaggart of MLB.com.

He also tied the single-season record with his sixth start of 10 or more strikeouts and zero walks.

Aside from the impressive strikeout total, he also ranks second in the AL in ERA (2.73), WHIP (0.92) and opponents' batting average (.189). He trails teammate Justin Verlander in all three categories. 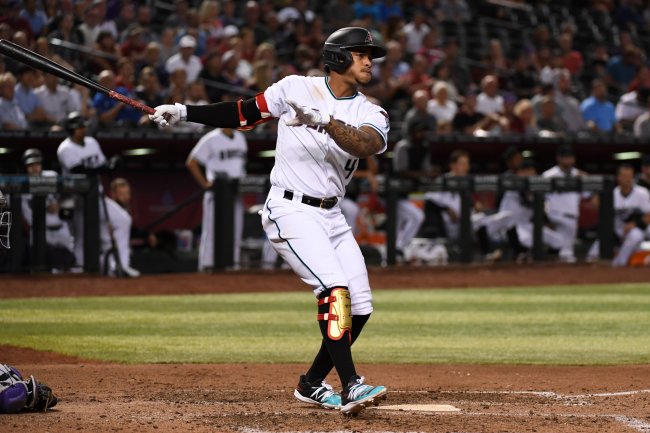 It's not as far-fetched as it might seem on the surface, especially with the Diamondbacks clawing their way back into the NL playoff picture.

He picked up right where he left off with a breakout first half that earned him a trip to the All-Star Game, and he's only gotten better as the season has progressed. In 48 games since the break, he's hitting .368/.445/.676 with 11 doubles, five triples and 12 home runs in 211 trips to the plate.

All told, he ranks second in the NL batting title race with a .330 average. He backs that with a stellar .390 on-base percentage and 72 extra-base hits, including 32 home runs to more than double last year's total.

"Great players do great things at great times," Diamondbacks manager Torey Lovullo told reporters when asked about his MVP candidacy. "I don't want to put that pressure on him. I'm going to let his bat speak for itself, but he's having a huge year." 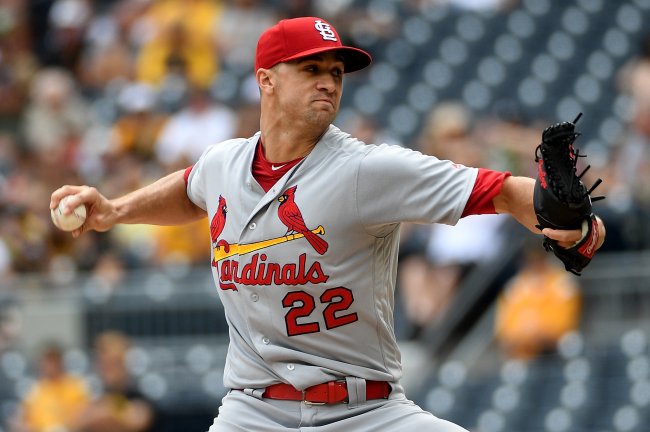 A case can be made that Jack Flaherty is the best pitcher in baseball right now.

As Jeremy Frank of @MLBRandomStats pointed out on Twitter, over his last eight starts, Flaherty has allowed a grand total of three earned runs in 54 innings of work. That's a 0.50 ERA, or one earned run allowed every 18 innings.

"Guys with that talent, but also that kind of real dedication to their craft—and he's clearly had this for a long time, displayed it in the organization—it just grows," Cardinals manager Mike Shildt told reporters. "He just continues to take advantage of opportunities and get better, and here's what we see."

What we saw last week were two more brilliant starts in which he tossed eight shutout innings, and it's no coincidence the Cardinals have taken charge of the NL Central race during Flaherty's recent run of success. 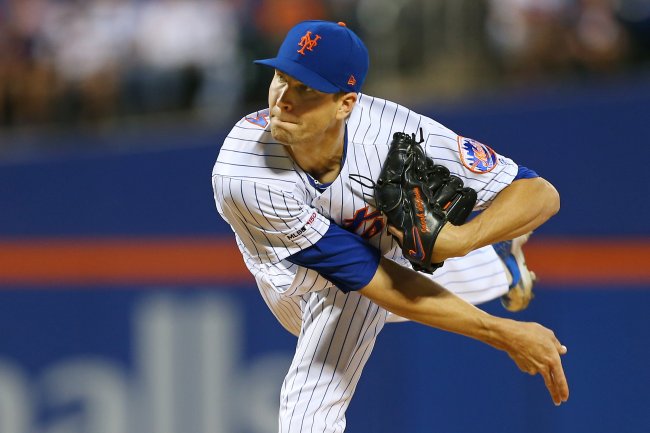 The Diamondbacks and Mets were on the outside looking in for a playoff spot leading up to the trade deadline, but they've managed to make things interesting with a late-season push.

Since the start of August, the D-backs are 21-13 and they've pulled to within 1.5 games of the second NL wild-card spot. Meanwhile, the Mets sit four games back and hold a 20-15 record during that same span.

This four-game series is undoubtedly important for both teams, and it's essentially must-win for the Mets, who can't afford to slip any further in the standings with the schedule dwindling. The D-backs took two of three in Arizona when the teams met earlier this year, but that was all the way back at the end of May.

A series win for either team would be a huge boost for the victor and an absolute dagger for the loser.

All stats courtesy of Baseball Reference and FanGraphs and accurate through Sunday's games.