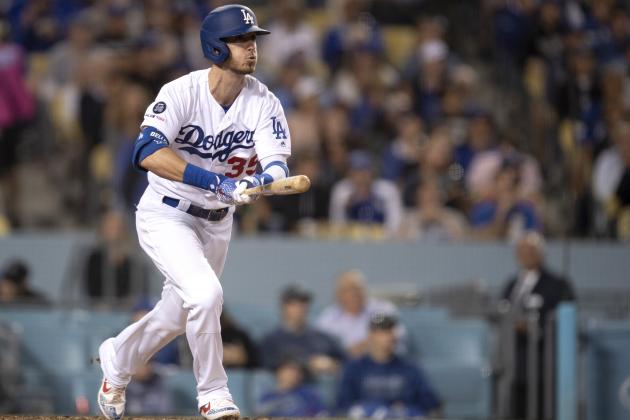 The Los Angeles Dodgers are back in the playoffs after clinching the National League West for the seventh straight year with Tuesday's 7-3 win over the Baltimore Orioles.

Dodgers beat Orioles 7-3 to win the NL West and become the first MLB team to clinch a playoff spot.

94-52 record for Los Angeles is enough to get a spot in the postseason 🌟 pic.twitter.com/LgRpHZXWdY

The Dodgers are the NL West Champs for the seventh consecutive year! #LABleedsBlue pic.twitter.com/WjT4EKoBYQ

They moved 18 games ahead of the Arizona Diamondbacks in second place in the division.

The next step for the team will be to secure the No. 1 seed in the league, entering Tuesday three games ahead of the Atlanta Braves.

Los Angeles has been among the best teams in baseball all season long, getting more than 30 games over .500 before the All-Star break and continuing to dominate throughout the summer.

The squad has every weapon needed to succeed on the field, beginning with MVP candidate Cody Bellinger. The slugger is among the league leaders in batting average, home runs, RBI and WAR while also making an impact in the field and on the basepaths.

Adding hitters like Max Muncy, Joc Pederson, Justin Turner and others make this one of the top offenses in the majors.

Meanwhile, the rotation has been the best in baseball this year with starters posting an ERA of 3.15 entering the day, via ESPN.

Hyun-Jin Ryu has been nearly unhittable for much of the season, and even with his recent struggles he creates a dominant one-two punch alongside Clayton Kershaw. Walker Buehler has also been on fire lately, as he and Kenta Maeda fill out an elite pitching staff.

Though the bullpen has been a bit more inconsistent, Kenley Jansen and Co. have performed well enough to help the team earn a postseason berth for the seventh straight year.

Of course, the Dodgers have higher hopes than just reaching the playoffs. After losing in the World Series in each of the past two years, they are likely thinking championship or bust in October.

The first hurdle is out of the way, but now the real work begins for Los Angeles.

Follow Los Angeles Dodgers from B/R on Facebook and get the latest updates straight to your newsfeed!

We'd like to send you the most entertaining Los Angeles Dodgers articles, videos, and podcasts from around the web.