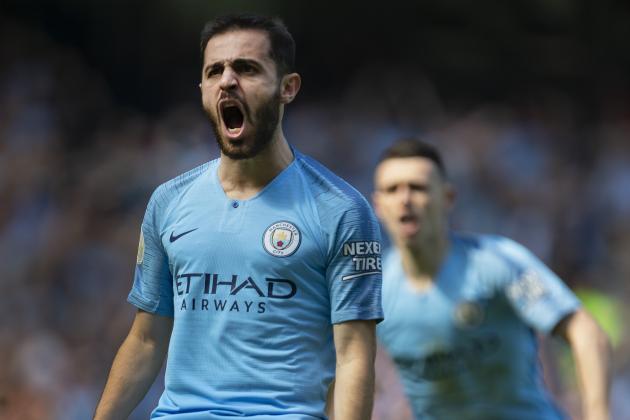 Manchester City midfielder Bernardo Silva has ambitions to win the Ballon d'Or in the future.

The Portugal international enjoyed a sensational 2018-19 season, winning three trophies with City and then helping his country to UEFA Nations League glory in the summer. Silva was crucial in those triumphs, establishing himself as one of the game's rising stars.

Speaking to BBC Sport, the midfielder said he is hopeful of being considered among the best players in the game but hasn't made individual prizes a priority:

"The Ballon d'Or award that nearly only two guys have won for the last 10 years—of course, I want to fight to be one of the best, and I want to win the biggest trophies like the Champions League, but these kind of individual awards do not need to be thought about.

"If they come, fantastic—but you just have to work hard to help your team."

Squawka Football summed up the best year of Silva's career:

Bernardo Silva for club & country since the start of the 2018-19 season:

Even though City are blessed with incredible depth in midfield, Silva has established himself as one of the first names on the teamsheet.

With so many options to choose from in central midfield, one player who appears set for another year on the fringes of the team is Phil Foden. Even so, Bernardo expects the England youth international to make rapid progress in the coming years.

"It's good not to put too much pressure on Foden," he said. "He was born in the 2000s, and he is six years younger than me, but he is a huge talent. If he keeps working as hard as he does and his mentality is good, he will be one of the best midfielders in the world in one or two years."

Late last season, there were indications Guardiola was ready to give Foden more responsibility, as he started some crucial matches in the Premier League title run-in for City.

The midfielder started the home clash with Tottenham Hotspur, whom City play in front of their own supporters on Saturday, and netted the only goal in a 1-0 win. He was then included in the starting XI for the showdown with Manchester United, which City won 2-0.

Sam Lee of The Athletic believes City see Foden as a successor to David Silva, who will leave the club at the end of the campaign:

Silva’s been set on his City exit plan for ages, and hasn’t made any secret of it. And it’s an opportunity to slowly introduce Foden, the dream successor - all things considered. Not that it’ll be any easier to take for City fans next May https://t.co/oEZb9cIqYK

Bernardo has been used in central areas at time in his City career and thrived, but with Leroy Sane set for a significant spell on the sidelines this term, the Portuguese looks set to play on the right flank a lot, as he did last season, with Raheem Sterling on the left.

That should ensure Foden has opportunities. The youngster will need to seize his chances and prove he can be a crucial player in the campaigns to come.

We'd like to send you the most entertaining Manchester City articles, videos, and podcasts from around the web.