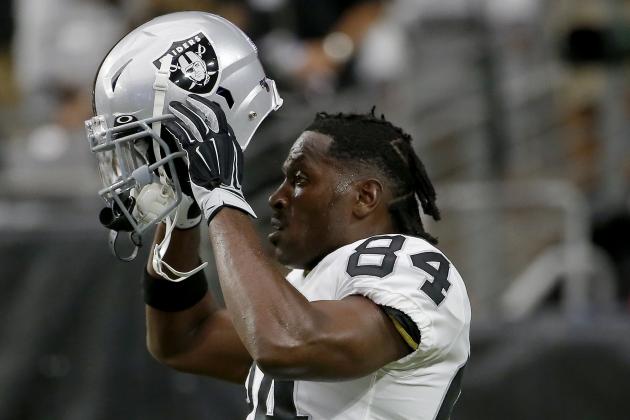 Antonio Brown is back with the Oakland Raiders and addressing the issues that have kept him away.

Following the Raiders' 33-26 preseason win over the Arizona Cardinals on Thursday night, the All-Pro receiver denied that he was considering retirement while disputing the NFL's policy that requires all players to wear helmets certified by the National Athletic Equipment Reconditioners Association, which outlawed Brown's preferred helmet he has worn his entire career because it was manufactured over 10 years ago:

Antonio Brown: Absolutely, I feel misunderstood. I’m not here to try to win people over or make people feel a certain way about me. I’m an athlete. I’m a human being. I’ve got tough skin. Just treat me like a human. Treat me w/ respect. But through it all, I’ve got a strong heart

Brown did not play in Oakland's Week 2 preseason matchup but was dressed and seen in good spirits on the sideline multiple times throughout the contest. Prior to it, he even ran a few routes in warmups as he continues to heal his frostbitten feet.

"My feet are healing in the right direction," Brown said, per the Las Vegas Review-Journal's Michael Gehlken. "I'm just ready to be around my teammates and get to work and be with the guys."

ESPN's Adam Schefter had initially reported on Aug. 9 that Brown was threatening to walk away from football:

And now this: Raiders’ WR Antonio Brown has told team officials that, unless he gets to wear his old helmet, he will not play football again, per league sources.

Antonio Brown believes the new helmet that the rules mandate he wears protrudes out and interferes with his vision as he tries to catch football. The Raiders have been sending Brown other approved helmets to try out but, at this time, he is not interested in wearing any of them.

However, Brown rejoined the Raiders on Tuesday after his grievance against the NFL to wear his old helmet was rejected by an arbitrator one day earlier.

"While I disagree with the arbitrator's decision, I'm working on getting back to full health and looking forward to rejoining my teammates on the field," Brown tweeted in response. "I'm excited about this season appreciate all the concerns about my feet!"

Brown also used Twitter in an attempt to track down "a Schutt Air Advantage Adult Large Helmet that was manufactured in 2010 or after."

Earlier Thursday, the San Francisco Chronicle's Matt Kawahara reported Brown had found the versions of his preferred helmet for which he was looking, though steps are still necessary before the NFL will approve their use in a game.

"We're working with the NFL to make sure we're following procedures to be out there in the right equipment," Brown said Tuesday, per Kawahara.

Oakland acquired Brown through a trade with the Pittsburgh Steelers in March. The four-time All-Pro posted at least 1,000 receiving yards each of the last six seasons and in seven of his nine total years with the Steelers. In 2018, he recorded a career-high 15 touchdown catches, which led the NFL.

The Raiders will be eager to put everything outside of Brown's prolific production behind them.

We'd like to send you the most entertaining Oakland Raiders articles, videos, and podcasts from around the web.