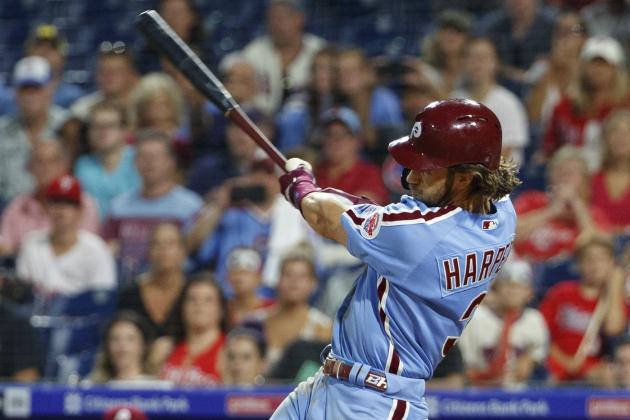 Bryce Harper has his first signature moment with the Philadelphia Phillies.

Down two runs to the Chicago Cubs in the ninth inning, the superstar launched a walk-off grand slam that still might not have landed:

He showed his excitement after the game:

"That was sick. Wow...that was awesome."

Even Bryce is still amazed at the unbelievable grand slam walkoff and the sweep. He is soaking it all in after the game in his postgame interview with @GmurphNBCS pic.twitter.com/oVeqX9MPTe

It was the first walk-off grand slam for the Phillies while trailing since Ozzie Virgil in 1983, per Sarah Langs of MLB.com.

Philadelphia trailed by five runs going into the eighth and was down 5-1 in the ninth, but the squad came through with a six-run inning off Rowan Wick, Pedro Strop and Derek Holland to seal the 7-5 victory and a three-game sweep of the Cubs.

In the midst of a tight wild-card race, this game could end up being huge by the end of September.

Harper has had an up-and-down year with the Phillies since signing a 13-year, $330 million deal in the offseason, but there will be no complaints about him Thursday night.