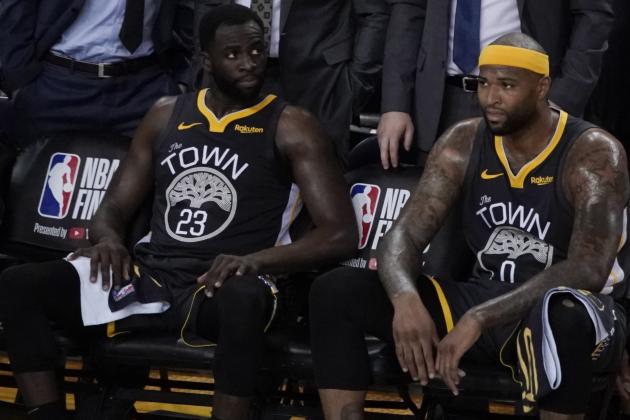 DeMarcus Cousins tore his ACL during a workout in Las Vegas on Monday, and his former Golden State Warriors teammate Draymond Green was "at a loss for words" over the injury Thursday.

"One of my goals coming into this season was for DeMarcus to destroy everybody and come back and show how great of a player he is and get what I think he deserves," Green told The Undefeated's Marc Spears (h/t ESPN's Ohm Youngmisuk). "I'm really at a loss for words about it. It's one that really hurt me for sure."

Cousins signed a one-year contract with the Los Angeles Lakers this summer after spending last season with the Warriors, a tenure that was hampered by a torn quadriceps in April. Previously, the 29-year-old center had suffered a ruptured Achilles in January 2018 while still a member of the New Orleans Pelicans.

Excel Sports' Jeff Schwartz, Cousins' agent, told ESPN's Adrian Wojnarowski that there is no timeline for surgery. It's unclear if he will be able to play at all during the 2019-20 season.

"It's no joke when you get injured," Lakers guard Kyle Kuzma said, per Wojnarowski. "This is our livelihood and it's something that we love to do. It's super unfortunate for a guy like DeMarcus because you [can] just tell how much he loves basketball through all these injuries—he's fought back and tried to get back as early as possible. ... He was going to be a big part of what we're going to do."

Players around the NBA showed their support for Cousins after news broke of his injury:

Players around the league send their best wishes to Boogie 🙏 pic.twitter.com/5BYyWXjCr7

With Cousins at the very least forced to miss the majority of yet another season, it's worth recalling an interview he gave in June to ESPN's Rachel Nichols in which he admitted he "was just ready to quit" after suffering his quad injury.

From a Lakers perspective, Cousins' absence will likely mean a larger role for veteran center JaVale McGee. It could also cause L.A. to utilize All-Star Anthony Davis at center if needed.

Follow Los Angeles Clippers from B/R on Facebook and get the latest updates straight to your newsfeed!

We'd like to send you the most entertaining Los Angeles Clippers articles, videos, and podcasts from around the web.