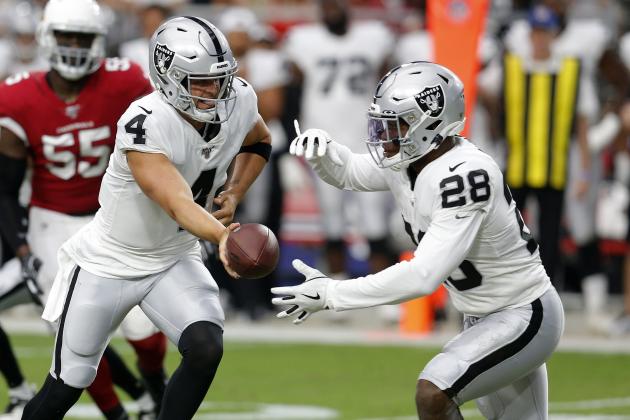 Week 2 of the NFL preseason kicked off Thursday with five games.

The day gave fantasy football players the opportunity to check out some potential picks as the NFL's 100th campaign quickly nears.

Here's a look at the performances of a trio of running backs and where their fantasy outlooks may stand after Thursday.

The rookie drafted 24th overall out of Alabama is slated to be the Raiders' starting running back, and he only reaffirmed that notion by rushing for 21 yards on four carries in limited action versus the Arizona Cardinals.

He also tallied a couple of six-yard efforts.

Jerry McDonald of the Oakland Tribune didn't need to see any more:

And Dieter Kurtenbach of the Bay Area News Group predicted 2019 could be a great season for the ex-Crimson Tide player:

If Josh Jacobs can stay healthy, he’s got a chance to be really really fun this season.

The last phrase is key. If Jacobs approaches 300 touches, he could end up being a first-round value for a team that may take him as late as the fourth round this year.

Jacobs currently has a 36.9 average draft position (ADP) in point-per-reception (PPR) leagues, per Fantasy Football Calculator, putting him on the edge of the intersection between the third and fourth rounds for 12-team leagues.

The rookie's stock only went up Thursday, though, so we could see him creep toward a higher ADP by the time Labor Day weekend rolls around.

The Philadelphia Eagles have a crowded backfield with rookie Miles Sanders, Corey Clement, Jordan Howard, Darren Sproles, Josh Adams and Wendell Smallwood all in the mix. But the first-year pro may gain the bulk of the carries by the end of the year if his preseason performances are any indication.

Sanders' vision and power were on full display when he carried a few Jacksonville Jaguars defenders en route to a 16-yard gain:

.@BoobieMilesXXIV displays his vision and keeps his feet moving for a 16-yard run.#PHIvsJAX | #FlyEaglesFly pic.twitter.com/eUhaCxamrq

Jeff McLane of the Philadelphia Inquirer and Zach Berman of The Athletic added further context:

That Miles Sanders' 16-yard run was a designed inside split zone, but when the end got inside Andre Dillard, the rookie RB just kicked it outside. Yards after contact were a bonus. #Eagles

That Miles Sanders 16-yard run is what he's shown all camp, except this time he could push for yards after contact. Optimism about Sanders is legitimate. Going to have a Day 1 role in this offense.

He also scurried for another 12 yards, although he could have lightly jogged for a sizable gain given the offensive line's efforts to create a lane:

.@BoobieMilesXXIV shows off the explosiveness with a 12-yard gain on his first carry!#PHIvsJAX | #FlyEaglesFly pic.twitter.com/zOcB9C6dzk

Sanders also made a great blitz pickup on a 38-yard touchdown pass from quarterback Clayton Thorson to wideout Greg Ward:

Clayton Thorson places the pass where it needs to be and Greg Ward handles the rest for a 38-yard score.#PHIvsJAX | #FlyEaglesFly pic.twitter.com/XQfhDgy4xd

The former Penn State star helped his cause during a summer in which he's received rave reviews during training camp. Zack Rosenblatt of NJ.com reported on Aug. 5 that the rookie was "easily...the most impressive runner through 10 training camp practices."

Sanders' fantasy case is interesting, as his 66.9 ADP places him in the sixth round.

However, there's a forward-thinking case to be made that teams should take him a few rounds earlier. Sanders isn't the anointed starter now. But if he keeps this up and eventually starts, teams could get ahead of the news curve. They may reap the rewards in December come playoff time.

Given how he's played, it's certainly conceivable that Sanders runs with the starters right away or perhaps soon into the season. The key is to get on the hype train before it leaves the station.

The multi-talented Ty Montgomery struggled to find his niche with the Green Bay Packers and Baltimore Ravens last season, but he may have found a home with the New York Jets.

Montgomery looked good Thursday as he rushed seven times for 36 yards and a score against the Atlanta Falcons:

We've scored a touchdown on 100 percent of our drives run by the first team.#NYJvsATL | #TakeFlight pic.twitter.com/R5mfoeWqTX

Manish Mehta of the New York Daily News wrote on Aug. 7 that Montgomery may be the "sneakiest weapon at [head coach] Adam Gase's disposal" who "could be an invaluable chess piece for the Jets spread-the-wealth offense this season."

Montgomery, who has seen time at running back and wideout during his four-year NFL career, told Mehta that he feels like a "true hybrid" in Gase's scheme:

"He's not really struggling with are you a running back or are you a receiver? When we have conversations, he just says, 'You're a football player. I know what you can do as a route runner and I know what you can do running the ball.' He doesn't seem to be trying to figure out whether I'm a running back or you're a receiver. I feel like a true hybrid in this offense."

Montgomery probably won't be getting too many carries behind superstar running back Le'Veon Bell, but he's notably listed ahead of Bilal Powell on the depth chart. The ex-Stanford Cardinal should also see a few extra targets as a receiver, although the three starting spots are currently held by Robby Anderson, Jamison Crowder and Quincy Enunwa.

The issue is that Montgomery may not be worth drafting outside of deeper leagues because he doesn't have a clear-cut role that will make him viable in fantasy.

In the event of an injury to Bell or another pass-catcher, Montgomery may accrue some value, but he's not worth a pick at the moment simply because the touches aren't guaranteed to be there.