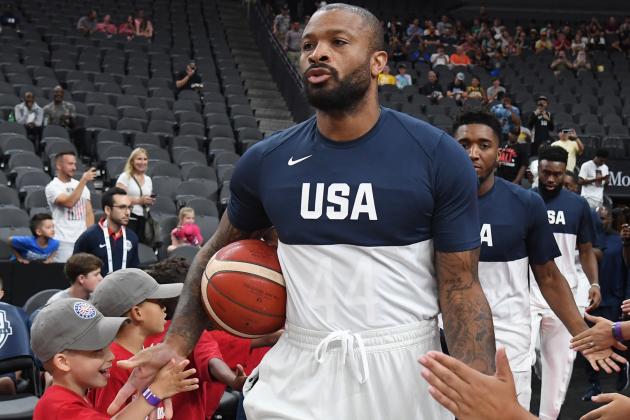 "Nobody gave the whole perspective of what happened," Tucker said Thursday, according to the New York Times' Marc Stein. "They just threw the score up and said, 'They lost.' It was two quarters after we'd been playing two hours. We didn't play a game. That was two quarters of practice and whatever."

This team defeated Team USA 36-17 in a scrimmage today:

Whether the matchup was a full game or two quarters, the poor showing certainly won't help improve the cynicism that has surrounded this roster in the lead to the FIBA World Cup.

After stars such as Anthony Davis, James Harden, Damian Lillard, CJ McCollum and many more—including most recently Kyle Lowry and Marvin Bagley III—decided to withdraw their names from consideration, Team USA pivoted to a much younger and relatively less experienced group.

As a result, expectations have receded. CBS Sports' Michael Kaskey-Blomain compared this year's FIBA roster to 2002's, which failed to medal.

"The 2002 team is probably the closest comparison, roster-wise, to the 2019 team," he wrote. "There's talent on both teams, but both lack the superstar-level players that the other iterations had at their disposal."

"This is like a once-in-a-lifetime opportunity for a lot of us," the 29-year-old Boston Celtics point guard said. "I think a lot of us are happy those guys pulled out because this is our chance. It's our chance to get on the big stage and showcase our talent. A chance for us to do something new. It'll be a new-look team. Everybody is kind of doubting us, but I think we're hungry."

The senior team's recent embarrassment could serve as an additional chip on the team's shoulder.

Team USA is scheduled to play an exhibition against Spain on Friday ahead of the FIBA World Cup, which begins on Aug. 31 in China.