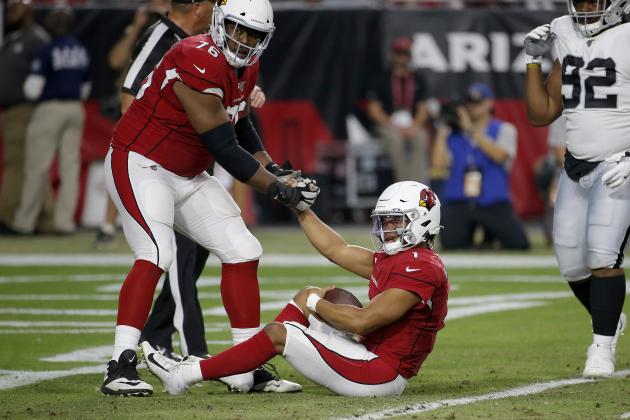 Kyler Murray looked like a rookie quarterback Thursday night in the Arizona Cardinals' 33-26 loss to the Oakland Raiders in Week 2 of the NFL preseason.

The top overall pick impressed in his preseason opener last week, but growing pains are inevitable. Against the Raiders, Murray went just 3-of-8 passing for 12 yards and no touchdowns or interceptions. The reigning Heisman Trophy winner played in four series through the first and second quarters.

While Murray's debut went better than his encore, he and first-year head coach Kliff Kingsbury have yet to orchestrate a scoring drive:

Along with Murray, Raiders wide receiver Antonio Brown drew plenty of attention ahead of Thursday night's matchup. The 31-year-old has been making headlines throughout the preseason away from the field, most recently due to a disagreement with the league over what helmet he's allowed to wear.

The four-time All-Pro was dressed for Thursday's game and participated in warmups but did not make his official Raiders debut as he continues to recover from frostbitten feet. According to NFL Network's Ian Rapoport, Brown is "very close to practicing."

The Raiders opened the game with three consecutive runs by rookie first-round pick Josh Jacobs—his first action of the preseason—before Derek Carr attempted and completed his first pass of 2019 to Tyrell Willams.

Carr connected with Williams on a 27-yarder along the left sideline, but it was a wide-open Ryan Grant who caught the game's first touchdown to cap off the six-play, 75-yard drive:

Antonio Brown fired up to be back with the team. pic.twitter.com/gp8TxNVM7u

Those two passes would conclude Carr's evening, and Jacobs would finish with a solid four carries for 21 yards (5.3 yards per carry average).

The Cardinals' opening drive—or any drive with the first-team thereafter, in fact—did not run as smoothly. Murray was called for two false starts and one delay of game. Both of Murray's false starts were a result of his pre-snap clap.

Oakland was able to flush Murray out of the pocket and sack him twice (Brandon Marshall, LaMarcus Joyner), one of which for a safety. That is no small feat for a defense that recorded 13 sacks last season.

Even when the Cardinals' defensive reserves came in, Oakland continued to have a field day. Backup quarterback Mike Glennon hit a streaking Rico Gafford for a 53-yard touchdown with 2:33 remaining in the first quarter to give the Raiders a commanding 17-0 lead:

I don't know how much the first-team defense is going to play, but the unit's first two series this preseason -- save for the forced fumble near the goalline -- have been no bueno.

Meanwhile, it wasn't until backup Brett Hundley took over for Murray that Arizona scored. The 26-year-old was able to find Trent Sherfield for a 40-yard touchdown pass that shaved the Raiders' lead to 26-7.

That, plus Charles Kanoff connecting with rookie second-round receiver Andy Isabella for 59 yards and a score with 2:49 left in regulation, were the silver linings for Arizona.

Rookie tight end Caleb Wilson—2019's "Mr. Irrelevant"—walked the game off with a touchdown catch from Drew Anderson as time expired, but the Cardinals' performance prior to that mostly overshadowed any positive momentum. Arizona's sloppy outing was perhaps best illustrated by its 14 penalties for 108 yards.

Oakland's (2-0) Week 3 opponent will be the Green Bay Packers on Thursday, Aug. 22, in Winnipeg, Canada. The Cardinals (1-1) will have until Saturday, Aug. 24, to regroup before traveling to take on the Minnesota Vikings.