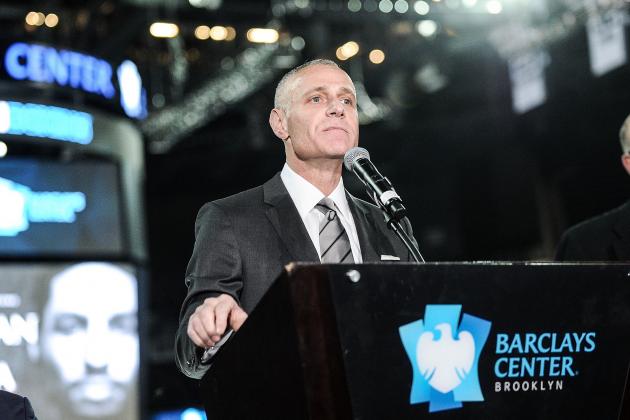 Scott Soshnick of Bloomberg, ESPN's Tim Bontemps and others reported the news on Thursday.

Josh Kosman and Brian Lewis of NYPost.com first reported that Tsai, who currently owns a 49 percent stake in the team, would purchase the remaining 51 percent for $1.35 billion. By the time the deal comes through, Tsai will have paid $2.35 billion for full ownership. Per Kosman and Lewis, that will mark the most expensive purchase paid for a sports franchise. Kosman and Lewis noted the deal is "valued at more than $700 million."

“I’ve had the opportunity to witness up close the Brooklyn Nets rebuild that Mikhail started a few years ago. He hired a front office and coaching staff focused on player development, he supported the organization with all his resources, and he refused to tank,” said Tsai. “I will be the beneficiary of Mikhail’s vision, which put the Nets in a great position to compete, and for which I am incredibly grateful. I also want to thank Dmitry and Brett for their guidance and friendship, and I hope to see them often in Brooklyn.” Tsai continued, “We are committed to maintaining Barclays Center’s iconic status by bringing together culture, community, and entertainment for our fans and everyone in New York.”

Yormark worked under ex-team owner Bruce Ratner before serving during Prokhorov's nine-year ownership tenure. Per Bontemps, he was instrumental in moving the team from its New Jersey homes in East Rutherford and Newark to Brooklyn in 2012.

According to Nets Daily, the 52-year-old worked with NASCAR for eight years before joining the Nets.

The Nets are undergoing seismic changes on and off the court.

During this offseason, the team inked 2013-14 NBA MVP Kevin Durant and point guard Kyrie Irving, who have made a combined 16 All-Star games.

Durant is out for next season with a ruptured Achilles, but the team should be strong in 2020-21 barring any setbacks.

Ultimately, Tsai is going all in at the right time with the Nets looking like strong NBA title contenders heading into the 2020s.