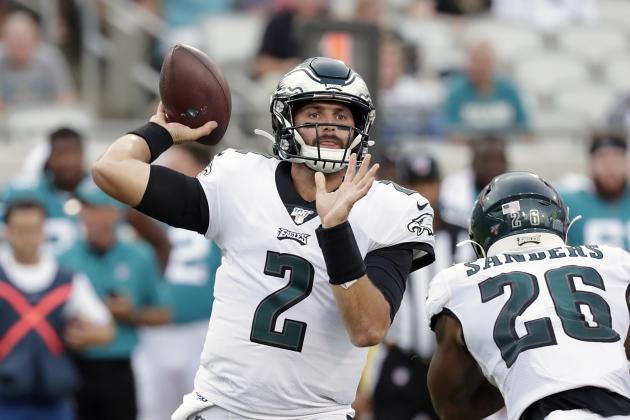 Philadelphia Eagles quarterback Cody Kessler was placed in the concussion protocol after leaving Thursday night's preseason game against the Jacksonville Jaguars on the opening drive, the team announced.

Cody Kessler just got destroyed and is coming out of the game. I know none of you care about that. But Clayton Thorson is now the Eagles' only healthy QB. Which means he's gonna play an entire preseason game and we're one fluke injury away from some real weird stuff happening.

Prior to exiting, Kessler was 1-of-4 for 11 yards in the game, adding 14 yards on the ground as well:

Kessler's injury leaves the Eagles extremely thin at the quarterback position for the remainder of the exhibition. Kessler was starting in place of Carson Wentz, who has missed 13 total games (including postseason) the last two seasons due to injuries. Backup Nate Sudfeld is expected to be out six weeks after suffering a broken wrist in the preseason opener last week.

As a result, Thorson is the only available quarterback on the roster following Kessler's injury. Of note, former Ohio State quarterback Braxton Miller is a member of the Eagles, though he is attempting to make the team as a receiver.

Philadelphia signed Kessler back in May after the 26-year-old was released by Jacksonville after one season with the team. Kessler made five appearances for the Jaguars in 2018, going 2-2 in four starts. He completed 64.9 percent of his passes for 709 yards, two touchdowns and two interceptions.

He previously went 0-8 as the Cleveland Browns' starter as a rookie in 2016.