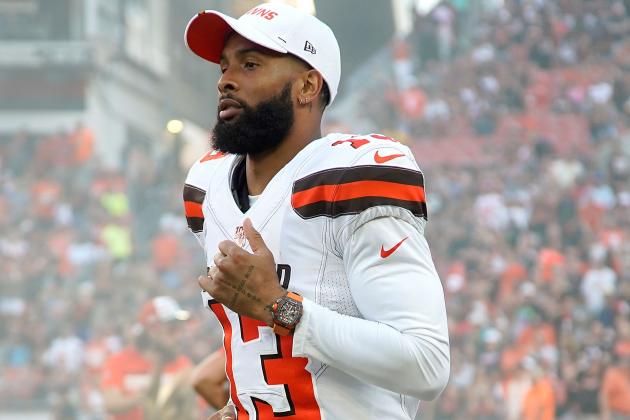 Odell Beckham Jr. plans to be on the field for the Cleveland Browns' regular-season opener against the Tennessee Titans on Sept. 8 despite a recent hip ailment, according to Cleveland.com's Mary Kay Cabot.

Cabot noted that Beckham "downplayed" his hip injury and relayed that he is following the Browns' plan for him, even though "he'd like to be out there" playing during preseason. The 26-year-old Pro Bowl receiver added that he's not worried about a lack of team reps with his new quarterback Baker Mayfield.

ESPN's Jake Trotter reported that Beckham said he "feels great" but acknowledged there's "no point in trying to push anything" in preseason.

"That's the reason why they have to plan it. Because I would just push," Beckham said, per Trotter. "Even in the past I would just push. That's the only thing I know. I'm too competitive. I'm too competitive to be out here and not go 110 [percent]. I don't know any other way. But I also don't like being out here and not being able to go. So it's tough."

Beckham did not play in Cleveland's preseason opener Aug. 8 and last participated in team drills at training camp Aug. 6.

The Browns traded for Beckham in March by sending a first-round pick, a third-rounder, safety Jabrill Peppers and offensive lineman Kevin Zeitler to the New York Giants.

Beckham last played a full 16-game regular season in 2016. Since then, he has battled a high-ankle sprain that eventually turned into an ankle fracture that required season-ending surgery in 2017 and a bruised quadriceps last season.

His ankle injuries in 2017—he only played four games—are a prime example of Beckham opting to "just push" through a not-as-serious injury and allowing it to become season-ending, which is exactly what the Browns want to avoid.

Heading into the 2019-20 season, the Mayfield-Beckham connection is projected to be prolific. The two of them together is perhaps the main reason the Browns are favored to win their division for the first time since re-entering the NFL in 1999.