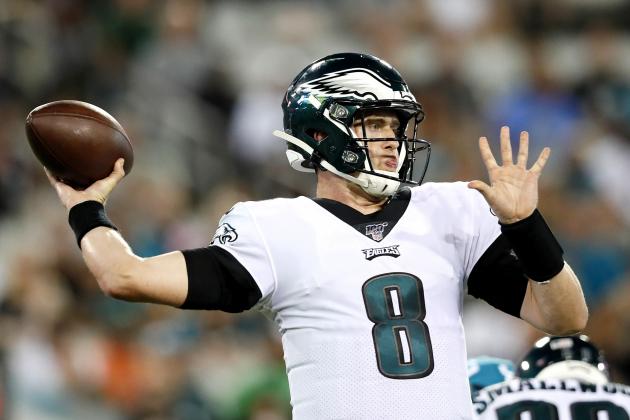 We didn't get the anticipated matchup between Carson Wentz and Nick Foles, but several players took advantage of the spotlight in the Week 2 preseason game between the Philadelphia Eagles and Jacksonville Jaguars.

Clayton Thorson led the way for the Eagles in what became a 24-10 win Thursday at TIAA Bank Field in Jacksonville.

Thorson totaled 175 passing yards and a touchdown, while the squad combined for 139 yards on the ground to help secure the easy win.

The reserves on both teams got a chance to show what they could do with several starters, including the quarterbacks, staying on the bench at this point of the preseason.

Cody Kessler got the start at quarterback for the Eagles but only lasted one series before he went into the locker room with a head injury. He finished 1-of-4 for 11 yards passing but at least added an 11-yard rush to help his stats.

Rookie fifth-round pick Clayton Thorson took over and had a solid performance under center.

He finished with 16-of-26 for 175 yards, one touchdown and one interception, also displaying solid composure in the pocket:

Clayton Thorson is being extremely quick, decisive and confident in his throws. Major step up from everything we’ve seen from him. #Eagles

Thorson throwing the ball with far more conviction this week. Amazing what a little confidence can do for you #Eagles

Greg Ward Jr. also helped him out with this impressive catch-and-run for the game's only touchdown in the first half:

Ward goes up.
Ward comes down.
Ward runs in.

The converted quarterback from Houston finished with two catches for 42 yards and could be an intriguing player going forward.

Another thing that will excite Eagles fans was the play of Miles Sanders, who tallied 31 rushing yards on five carries in the game.

Although he didn't get a carry after halftime, his brief appearance showed exactly what he can do for the team with his quick cuts up the field:

.@Eagles rookie Miles Sanders picks up the first down to start the game 👏#PHIvsJAX | @BoobieMilesXXIV pic.twitter.com/EReWEklknz

.@BoobieMilesXXIV displays his vision and keeps his feet moving for a 16-yard run.#PHIvsJAX | #FlyEaglesFly pic.twitter.com/eUhaCxamrq

He and Jordan Howard (four carries, 15 rushing yards) will likely split carries to start the season, but Sanders clearly has a lot of upside the Eagles should be able to take advantage of in 2019.

Josh Adams and Boston Scott also added rushing touchdowns in the second half and could factor into the depth chart going forward.

Add in two sacks from defensive end Daeshon Hall, and there were a lot of good takeaways for Philadelphia outside of Kessler's injury.

Gardner Mishew got the majority of playing time for Jacksonville at quarterback, finishing with an efficient 19-of-29 for 202 passing yards.

He also looked more comfortable throwing the ball than he did in Week 1 of the preseason:

Like the way Gardner Minshew is getting the ball out of his hands quick and making completions. Nice poise under pressure.

On the other hand, he lost a fumble and struggled to consistently get the Jaguars into scoring position. He led a field-goal drive just before halftime, but the offense was otherwise stagnant.

Jacksonville's offense did show a bit more life in the fourth quarter behind Alex McGough, who impressed with his legs. The 2018 seventh-round pick showed his athleticism in the pocket and then got into the end zone on a scramble up the middle:

Though it was mostly against Eagles reserves, the quarterback provided a rare bright spot on a quiet day for the Jaguars.

The Eagles will face the Baltimore Ravens in Week 3 of the preseason next Thursday, likely featuring more starters from both teams. The Jaguars will face the Miami Dolphins on the road Thursday.