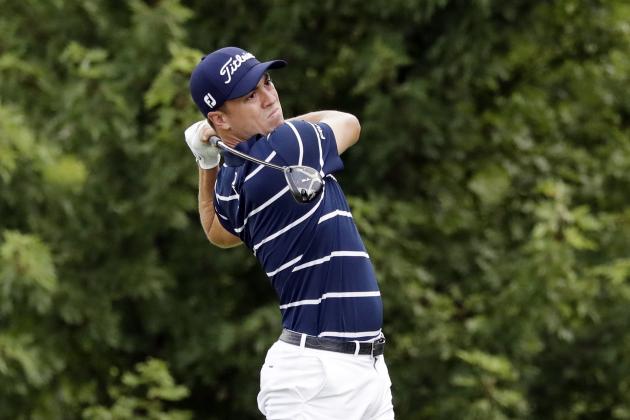 Justin Thomas and Jason Kokrak share the lead at seven under in a crowded field after the first round at the 2019 BMW Championship.

Five players, including Jim Furyk, are tied for third and one shot off the lead.

Tiger Woods, returning to the course after withdrawing from the Northern Trust prior to the second round due to an oblique injury, had a successful rebound with a one-under-par 71.

Here's the top of the leaderboard from Medinah Country Club in Illinois, via PGATour.com:

Seeking his first win since the WGC-Bridgestone Invitational in August 2018, Thomas was on point in his opening round. The Kentucky native had seven birdies, including this one from 57 feet to briefly take sole possession of the lead:

Thomas' 65 was his best round in a tournament since the RBC Canadian Open in June, though it likely wasn't what he was expecting based on how his day started.

"I probably would say that I had the worst warm-up I've ever had in my life this morning," he told reporters after the round. "I didn't know what it was going to do. I didn't know how I was going to hit it, and my dad and Jimmy and I just kind of said that we were going to have to guess out there and just try to find something."

Kokrak wasn't quite as sharp as Thomas, finishing the front nine with a bogey, but he made up for that with an eagle on No. 10. His birdie on 15 moved him into a tie with Thomas.

Lurking down the leaderboard is Rory McIlroy, who ended the day tied for 25th at three under par. His best shot came on No. 11 when he just missed an eagle from 151 yards out:

With the exception of two poor performances at the Memorial Tournament and British Open, McIlroy has been a steady force on the PGA Tour this season. He has finished in the top 10 13 times in 17 tournaments and has two wins.

Woods has played a limited schedule since winning the Masters in April. Thursday marks his 14th round of golf in the past four months. This was a marked improvement over where his game appeared to be last week when he opened the Northern Trust with a 75.

A two-time winner of this event, Woods got off to a hot start with birdies on the first and third holes.

There are still areas for Woods to improve. He had three bogeys and struggled with the putter after that opening, costing himself 1.14 shots on the green. If the 43-year-old can correct those issues before Friday's second round, he will have a chance to post a low score and put himself in contention.

The weekend is shaping up to be competitive with 22 players within two three of Thomas and Kokrak. Only 11 players in the 69-man field failed to break par, so there will be plenty of low scores to go around for the next three rounds.