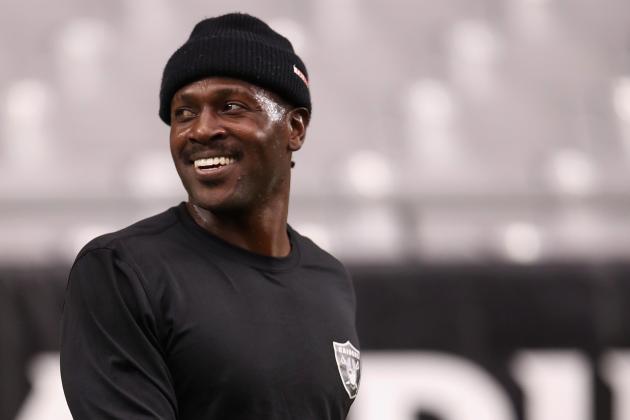 NFL Network's Ian Rapoport reported Thursday that it "sounds like [Oakland Raiders wide receiver Antonio Brown] is very close to practicing and should do so next week."

Brown, 31, has been off the field for the vast majority of training camp.

The 10th-year veteran suffered frostbitten feet after failing to wear proper footwear in a cryotherapy chamber, per Chris Simms of PFT Live.

Furthermore, Brown filed a grievance against the NFL to wear an old helmet, but it was denied.

Aside from Rapoport's news, a few positive signs have emerged regarding Brown's imminent return.

The wideout traveled with the Silver and Black to their Week 2 preseason game against the Arizona Cardinals and got some pregame work in:

Vic Tafur of The Athletic posited that Brown could return to practice Saturday based on comments made by general manager Mike Mayock during the most recent Hard Knocks episode, which aired Tuesday and covered the previous week's events:

Mayock told Hard Knocks AB will be full speed in a week, so back to practice Saturday? https://t.co/kS3B2pjtWI

Tafur also noted that Brown was cutting on the field during pregame warmups and wrote that he is "really close."

After the game, Raiders head coach Jon Gruden spoke with reporters about the star wideout's comeback.

"I'm not going to say anything else, but I'm very optimistic after what I saw tonight," Gruden said per Paul Gutierrez of ESPN.com.

"Hell yeah, it was encouraging. It was great to have him back. You know, it's been a strange, strange couple weeks, with frostbite and the helmet grievance. Can't say that that's common, at least in my history in this league. But we've weathered the storm."

Brown can't return soon enough as the team prepares for its Sept. 9 Week 1 opener against the Denver Broncos.

The wideout spent nine seasons with the Pittsburgh Steelers before being traded to the Raiders this offseason, and any reps he can get between now and then with quarterback Derek Carr are invaluable as the two develop chemistry. Carr was notably throwing to Brown during pregame warmups before the Cardinals contest.

According to Silver and Black Pride, the Raiders have three more practices from Saturday through Monday before they break camp. They'll play two more preseason games on Aug. 22 and Aug. 29 before gearing up for their AFC West contest versus Denver.

We'd like to send you the most entertaining Oakland Raiders articles, videos, and podcasts from around the web.