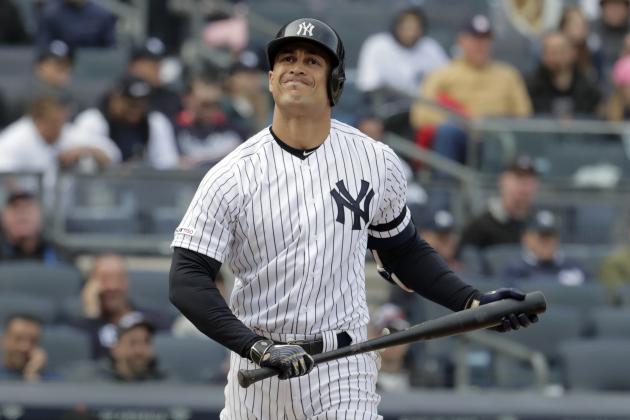 New York Yankees star Giancarlo Stanton called this season "brutal," according to MLB.com's Bryan Hoch, as injuries have limited him to just nine games in 2019.

"You just seem so far away from the game," Stanton said of being injured, per Lindsey Adler of The Athletic.

Stanton added that he would like to return to the field in time to have "a few weeks of at-bats" before the playoffs begin. Per Adler, Yankees general manager Brian Cashman expects the 2017 National League MVP to return in September.

Giancarlo Stanton was emphatic that he's not going to rush back from the knee injury, despite the limited time left in the season. Said he is feeling good now while ramping back up.

Entering 2019, Stanton had missed a total of seven games over the previous two seasons. However, injuries began to take their toll three games into the season.

On April 1, the 29-year-old landed on the injured list with a left biceps strain. He was sidelined for more than two months as he wound up suffering a left shoulder injury while rehabbing his biceps.

Stanton made his return from the IL on June 18—only to find himself back on the shelf eight days later with a sprained right knee. He has not played in a game since June 25.

New York has withstood Stanton's injuries—along with a number of other players' ailments—and finds itself in solid positioning for the postseason. The Yankees (81-41) are tied for the best record in the majors and own a 10-game lead in the American League East.

Though the Bronx Bombers own the top offense in baseball despite not having Stanton for nearly the entire season, getting him healthy would only make the lineup that much more dangerous. After all, this is someone who has averaged 34 dingers per season for his career and is just two years removed from slugging 59, the most anyone had hit in a single season since 2001.