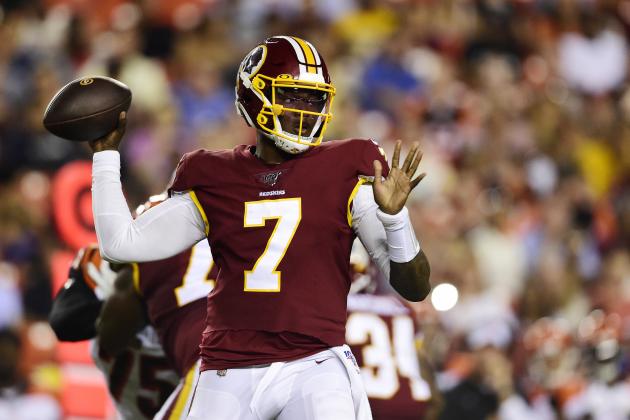 The Cincinnati Bengals defeated Washington 23-13 at FedExField in Washington, D.C., on Thursday night in what marked the second exhibition of the preseason for each club.

Veteran Case Keenum once again got the start, going 3-of-7 for 52 yards. Meanwhile, rookie Dwayne Haskins did his best to put his two-interception performance last week behind him by completing seven of 14 passes for 114 yards, one touchdown and zero interceptions.

But before either Keenum or Haskins could take the field, the defense spotted Washington an early lead. As the Bengals threatened to get on the board first on the game's opening drive, safety Montae Nicholson came up with a 96-yard pick-six:

That was just the start of a rough showing for Dalton and the starting unit, which was without star wideout A.J. Green, among others.

Overall, the two teams combined to commit 11 penalties within the first 11 minutes of the game.

#Bengals can't get out of their own way. Six offensive penalties for 45 yards in the so far. Meanwhile, they ran 13 plays for 46 yards. #InThePositive

It was a quiet night for Keenum, who played into the second quarter. The 31-year-old didn't lead his team on a scoring drive, though he had a 44-yard completion that could have led to points wiped out due to offensive pass interference.

While Keenum did little to stand out, Haskins shook off a disappointing debut by coming out ready to play. The 15th overall pick completed two of his three pass attempts on his first drive for 59 yards, putting his strong arm on display with a 55-yard touchdown pass to Robert Davis:

Dwayne Haskins' first TD pass of the preseason is a BEAUTY 🎯🎯🎯#CINvsWAS pic.twitter.com/vRlB69sP8o

That impressive dime received no shortage of attention:

Dwayne Haskins stands tall as the pocket collapses around him and airs it out for Robert Davis, who's able to get under the ball and haul in 55-yard touchdown from the rookie. That makes two receiving TDs for Davis and Haskins first career TD. He saved it for fans at home #HTTR

So.... Dwayne Haskins? What a freaking throw!

Unfortunately for him, the rookie ran into turnover troubles in the second half, as he coughed the ball up after a blindside sack by Cincinnati defensive end Jordan Willis. It marked Haskins' third turnover in less than four full quarters of action this preseason.

Along with some flashes by Haskins, Coach Gruden had to like what he saw out of seven-time Pro Bowler Adrian Peterson. Fresh off his first 1,000-yard season since 2015, the 34-year-old showed he still has something left in the tank:

He finished the game with 31 yards on four carries in one quarter of action.

On the other side of the field, Cincinnati rookie quarterback Ryan Finley had a solid showing, completing 20 of 26 passes for 150 yards, two touchdowns and zero interceptions.

Of note, Tristan Vizcaino—who previously missed a 36-yard attempt—gave the Bengals their first lead of the game with a 57-yard field goal midway through the fourth, and Alex Erickson put the game away moments later by returning a punt 75 yards to the house.

Both teams will be back in action next Thursday. Washington (0-2) will hit the road for a clash with the Atlanta Falcons, while Cincinnati (1-1) will return home for its first preseason game at Paul Brown Stadium this year, which will come against the New York Giants.