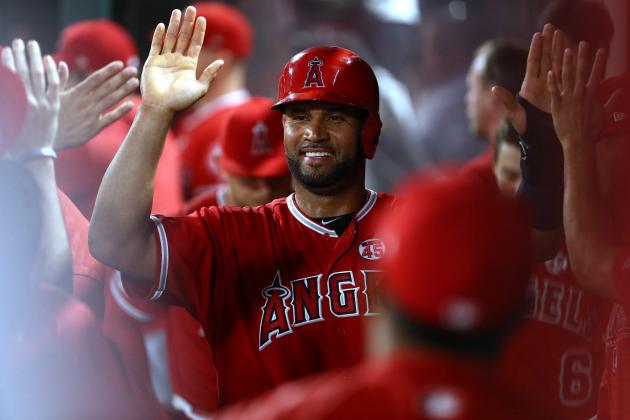 The Los Angeles Angels first baseman notched his 3,167th career hit in the bottom of the fourth inning against the Pittsburgh Pirates on Wednesday evening—a single to right field that scored Mike Trout—to become the owner of the most hits by any foreign-born MLB player in history:

Pujols singled again in the bottom of the eighth to score Shohei Ohtani and Kole Calhoun, which helped the Angels to a 7-4 victory. According to MLB Stats, the Dominican Republic native surpassed Adrian Beltre's previous record of 3,166.

It has already been a momentous season for Pujols.

Then, from June 21 to June 23, Pujols returned to St. Louis for the first time since he signed his 10-year, $254 million contract with the Angels in December 2011. Previously, the three-time MVP played for the Cardinals from 2001 to 2011, where he was crucial to the franchise winning World Series titles in 2006 and 2011.

Albert Pujols now has 3,167 career hits, which is the most by any foreign-born player in Major League history!@PujolsFive | #TheHaloWay pic.twitter.com/iPuIno8JQR

Following Wednesday's performance, Pujols owns a .242 batting average with 18 home runs and 70 RBI for the 59-63 Angels. Pujols is signed through the 2021 season.

Follow Los Angeles Angels from B/R on Facebook and get the latest updates straight to your newsfeed!

We'd like to send you the most entertaining Los Angeles Angels articles, videos, and podcasts from around the web.